Senators, in particular, will examine the agreements with Argentina and South Ossetia on mutual legal assistance in criminal matters and the agreement with Abkhazia on pension coverage of Russian citizens, permanently residing in the Republic. 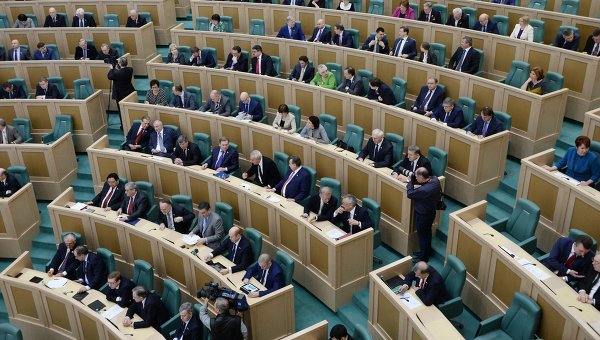 MOSCOW, 25 Dec. The Federation Council at the final meeting on Friday will review about 100 questions and will hear from the Minister for Far East development Alexander Galushka.

In the beginning of the meeting, senators will discuss the dismissal of Deputy Prosecutor General Alexander Zvyagintsev.

In the instrument unit – the law, the suspensive effect of the Treaty on the free trade zone in Ukraine, the document was adopted in connection with the economic part of the Association agreement between Ukraine and the EU. From 1 January 2016 in respect of Ukrainian goods entered duty.

The head of the international Federation Council Committee Konstantin Kosachev noted that any approval of the commissioners of the European Commission or the representatives of the Ukrainian government that the Russian decision violates international law — “absolutely untenable.” According to him, Russia’s position is “in full compliance with the Vienna Convention” on the law of treaties of 1969, which allowed the possibility of terminating or suspending the international Treaty on such grounds as a fundamental change of circumstances.

Senators also will consider agreements with Argentina and South Ossetia on mutual legal assistance in criminal matters, an Agreement with Abkhazia on pension provision of citizens of the Russian Federation, permanently residing in the Republic.

Before the Federation Council passed a law extending Amnesty for six months — until July 1, 2016. The proposal to extend the Amnesty of capital for six months and make this mechanism some adjustments announced in December, the President Vladimir Putin in the message to the Federal Assembly.

On the agenda of the renewal of the maternity capital until 2018 inclusive, for the liberation of pensioners aged over 80 years from the payment of contributions for capital repairs, increase the responsibility of subjects and participants of obligatory medical insurance.

Will also consider amendments to the Budget code in the part of the ban on provision of state support to companies based in offshore jurisdictions, and the Tax code regarding measures to stimulate investment activity. The senators will also discuss the law on geodesy, cartography and spatial data.

In the framework of the “governmental hour” the Minister of the Russian Federation for Far East development Alexander Galushka, in turn, will tell about measures on creation of conditions for priority development of the far Eastern regions.