Next year there are no factors for growth of car production, said Sergei Udalov of “AUTOSTAT”. Without the continuation of measures to support the Russian car market will continue to fall. 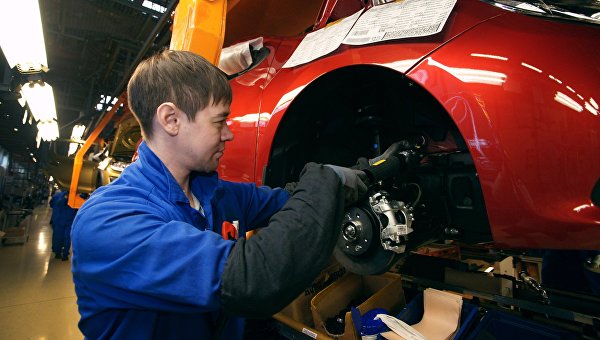 MOSCOW, 25 Dec. Assessment of the prospects of the Russian sector of production and sales for next year look disappointing: not only experts, but also the Ministry of industry and trade predict a market decline.

How serious, depends on the measures taken by the government to support the industry. The government has already announced that the automotive industry will be one of those industries that will be able to claim crisis support in the coming year.

“At best, if the situation will remain the same, the market can stay at its current level (2015 ed.), despite the fact that there will be some measures to support it”, — said Sergei Udalov of “AUTOSTAT”.

To mitigate the negative forecasts in the current macroeconomic environment will not only help the program support the demand, but also stimulating the exports of the automotive industry.

According to Udalova, next year there are no factors for growth of car production. Without proper support measures the volume of sales and production will fall. If oil is around $ 40 per barrel, maybe a drop in sales up to 20% to the current indicators, that is somewhere at the level of 1.2 million cars in 2016, says analyst.

“The situation in the automotive industry is clear – there are, first, excess capacity. Secondly, over the last three years, when the market fell, it shrank very much. Naturally, in this situation, companies must reduce their costs,” — says the analyst of “VTB Capital” Vladimir Bespalov.

Assessment of Ministry of industry and trade of the Russian Federation, loading of capacities of the Russian car industry, which is able to produce about 3.44 million vehicles a year in 2015 amounted to only 40%. While in 2010 this figure was 51%.

Without the continuation of measures to support the Russian car market will continue further decline in 2016, the level of capacity utilization will fall below the critical 30%, fears of the Ministry of industry and trade. According to the forecast of the Ministry, in the absence of state support for car market next year will continue rapid decline and will be reduced by 40% from forecast indicators for 2015, to 980 thousand cars.

With continuing support, the reduction would be only 9%, to 1.5 million units. About the total dependence of the sector from state support next year and says Udalov. Production in 2016 could be reduced by 5% in the current year to 1.3 million units.

The analyst of “VTB Capital” Vladimir Bespalov more optimistic: “depending on what will happen to the economy, ranging from 0 to 5% growth next year (sales of passenger cars and LCV – ed.), in the most optimistic scenario – 10%”. A small increase in 2016 is possible due to the low base effect of the year, due to the stabilization of the economy, hopes Bespalov.

At the same time, it notes the uncertainty in the market, its dependence on the ruble and the oil price. “I think this rate of fall (this year – ed.) in 2016 in any case we do not see more. In the worst confluence of events can be drop to 10%, but most likely this will not happen” — said the analyst.

It is also planned to optimize inefficient production capacity by concentrating government support around vysokomineralizovannyh (over 50%) and manufacturers to create conditions for increasing eksportoorientirovannoj automobile manufacturing.

To improve conditions of exports to plants in the long term, up to 2020, the Ministry proposes to eliminate protective import duties to compensate producers for the costs of shipping products to foreign markets and to offset the cost of adapting the machines to the technical requirements of export markets.

The last two measures might need 10 and 11 billion, respectively. It is assumed that the support measures will in 2016 to increase the export of Russian automobile industry in foreign countries to 63 thousand units, and in 2020 — up to 382 thousand vehicles.

On the advantage of the export models with recovery for the auto industry, and analysts say Roland Berger Strategy Consultants. According to them, the government and business needs to create a joint plan for the development of the automotive industry for 5 years. They also propose to stimulate additional investment from suppliers by updating 566 of the Ordinance in terms of setting a more realistic target level of localization.

In the run up to 2020, the Ministry of industry and trade taking into account the macroeconomic situation offers to limit the operation of commercial vehicles, cargo type and environmental factors to the transport tax, to control the directives of the state-controlled legal entities in the procurement process and to allow the use of “maternity capital” to buy the car.

Currently, the Agency evaluates the need for financing of programs of support of demand in the auto market in 2016 36.2 billion rubles, another 3.6 billion will need to subsidize the procurement of municipal transport and equipment housing and communal services, running on gas motor fuel. Support of demand will be sold next year by 500 thousand cars more, according to the Ministry.

Deputy Prime Minister Arkady Dvorkovich after the meeting at AVTOVAZ and even promised to support the proposal to increase the support of the automobile industry up to 50 billion rubles next year. Subsidies to automobile plants next year in the framework of the program “Automotive industry” will grow by 60%, up to 80,36 billion rubles. But at the same time, the government had already adopted a decision on indexation of the recycling collection from 1 January 2016 by 65%.