The President of Russia Vladimir Putin appointed Boris Gryzlov, Plenipotentiary representative of Russia in the contact group on Ukraine, the corresponding decree published on the official Internet portal of legal information Saturday, December 26. 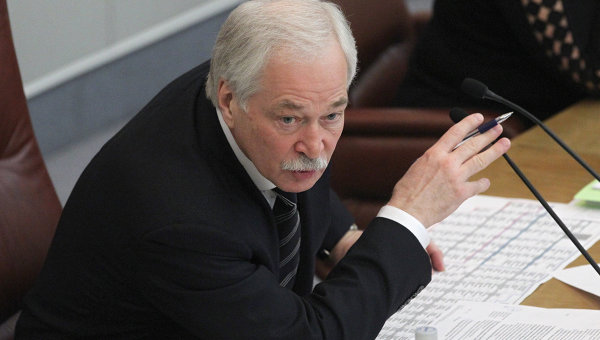 MOSCOW, 26 Dec. The Russian President Vladimir Putin on Saturday appointed a permanent member of the Security Council of Russia Boris Gryzlov, Plenipotentiary representative in the contact group on settling the situation in Ukraine. Experts and politicians assess this step as strengthening of the negotiating position of Russia in the Ukrainian settlement.

Now Russia in the contact group will have two leading negotiators, and Gryzlov was appointed in April, the special representative of the Russian Federation in the negotiations on Ukrainian settlement, the diplomat Azamat kulmuhametov. According to a source in Moscow, the diplomat will continue to work in the Russian delegation together with Gryzlov.

The President set a task

In accordance with the RF President’s decree published Monday on the official Internet portal of legal information, on Gryzlov’s duties “Plenipotentiary representative of the Russian Federation in the Contact group on settling the situation in Ukraine.” The decision came into force upon its signing on December 26, 2015.

Commenting on the appointment, Mr Gryzlov said that is tasked to do “everything necessary to conduct negotiations in the protracted internal conflict in Ukraine.”

“We will proceed from the need full and, most importantly, faithful observance of the Minsk agreements”, — said Gryzlov.

He added that it is the only way to stop civil war in Ukraine: it is necessary to restore normal life, to ensure respect for the rights of all people living there.

“I want to emphasize we are ready to conduct a dialogue with representatives of both sides of the conflict, and, ultimately, to find necessary compromise. Only in Ukraine really will be peace, and, therefore, there will be an opportunity to solve social and economic problems of people”, — said the Agency interlocutor.

In the Donbas news praised as an important step on the part of Russia. According to the Plenipotentiary representative of the self-proclaimed Donetsk national Republic (DND) on the negotiations in Minsk Denis Pushilin, the President of the Russian Federation is of great importance, “given that we are entering a new phase (settlement in Ukraine) in 2016”.

“It can be regarded as strengthening the position of the Russian Federation. It is also the personal attention paid by the President of Russia to this issue. We now understand that adds a heavyweight who has experience of communication with this country (Ukraine — ed.) during (former President Leonid — ed.) Kuchma and after it”, — said Pushilin.

Kuchma is currently the representative of Kyiv in the contact group.

The envoy of the self-proclaimed Luhansk national Republic (LNR) Vladislav Danego expressed hope that the state will ensure serious progress in the negotiations in Minsk.

“I think little will change and the style of work of the contact group. You will benefit from the important progress. This appointment suggests that the Russian Federation is more focused on solving the problem. It connects quite a serious heavyweights in politics. I think the work of the contact group will change somewhat with the connection of such a man as Boris Gryzlov,” said Danego journalists in Luhansk.

The head of the Duma Committee on CIS Affairs Leonid Slutsky is confident that the new appointment of Gryzlov will positively affect the negotiations between the conflicting Ukrainian parties.

“I am confident that his participation in the contact group with high status special representative will constitute a positive factor to the talks were more constructive and most importantly more efficient, which we have long been waiting for and what have been long awaited in Ukraine and especially in the new Russia”, — said the Deputy.

In turn, first Deputy Chairman of the Federation Council Committee on defense Franz Klintsevich noted that Gryzlov — “great negotiator” with the rare ability to reconcile the extreme positions.

“Well aware of Boris Gryzlov in the State Duma. It is distinguished by a rare ability to reconcile the extreme positions, not moving at the same time the valid edge of compromise. He is a great negotiator and “hard worker” will not” — said Klintsevich.

In his opinion, the appointment of Gryzlov and demonstrates the importance that Russia attaches importance to the settlement of the situation in Ukraine.

“Appointing such an authoritative policy, Plenipotentiary representative of Russia in the contact group on settling the situation in Ukraine, Vladimir Putin has demonstrated once again that Russia is extremely interested in the peaceful settlement of the internal Ukrainian conflict,” the Senator said.

“Russia will not surrender Donbass”

Experts in the decision of the President of RF saw, first of all strengthening of positions of Russia in the negotiations and its determination to defend its own interests and the interests of the residents of Donbass. Thus, the Agency’s Director of strategic communications Oleg Bondarenko said that the Russian Embassy in Minsk the contact group was insufficient, because in Ukraine it is the former President of the country Leonid Kuchma was “very influential person”.

“The appointment of Boris Gryzlov says that Russia Donbass will not give up, because as we know, Boris Gryzlov quite tough negotiator, and it is unlikely you will expect some compromises. So again fixes this tough position on the protection of residents of Donbas, for the protection of their interests, as well as to protect the interests of Russia in this region,” he added.

In addition, according to the expert, the appointment can be considered “the bolded is quite a tough position of Russia regarding the need for a literal fulfillment of the Minsk agreements and the inability to sacrifice the interests of the residents of Donbass for the sake of political nuance.”

“This (appointment) is connected with strengthening of positions of Russia and latching a firm position on the protection of the interests of Donbass”, — he stressed.

A similar view is held by the Deputy Director of the CIS Institute Vladimir Zharikhin.

However, unlike Bondarenko, Zharikhin not Gryzlov calls “a tough negotiator”, but rather sees the experience of his work in the Duma will allow flexibility in the negotiations.

“Gryzlov sufficiently experienced politician who has proved himself in the first place as Chairman of the state Duma of a man who experienced enough compromises with various political forces. Here these properties will be useful”, — said the expert.

He drew attention to the fact that “of course, Gryzlov is a trusted person Putin”. “It is also important”, — he stressed.

Boris Gryzlov — known Russian politician. He is currently a permanent member of the security Council of the Russian Federation. From 2001 to 2003, Gryzlov headed the Ministry of internal Affairs of Russia. In 2003 he was elected Deputy of the State Duma of the fourth convocation in December 2007 — the fifth convocation. In both assemblies he was Chairman of the lower house of Parliament.