MOSCOW, December 26. The President of Russia Vladimir Putin and Prime Minister of the Republic of India Narendra modi during a telephone conversation confirmed their mutual disposition towards further promotion of the relations of special and privileged strategic partnership between the two countries. About it reports a press-service of the Kremlin.

“Narendra modi warmly thanked Vladimir Putin for the hospitality provided during official visit of Indian leader to Moscow on 23-24 December, – stated in the message. – Gave a high assessment of the achievements, agreements in trade-economic, investment, scientific-technological and humanitarian spheres. The parties confirmed mutual striving for the further advancement of the relations of special and privileged strategic partnership between Russia and India”. 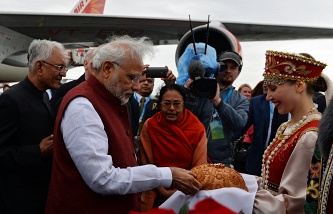 The visits of Prime Ministers of India in the Russian Federation since 2000. Dossier

The telephone conversation was initiated by the Indian side.

During the talks in the Kremlin on December 24, Putin and modi have discussed the entire range of Russian-Indian cooperation, as well as a range of international issues. In the presence of the leaders of the two countries signed a package of a half dozen documents. In particular, the sides signed two protocols on amendments to agreement on simplification of conditions of mutual trips of separate categories of citizens of the two countries and on mutual trips of owners diplomatic and service passports.

In the adopted on the results of the official visit to Russia of the head of the Indian government joint statement, consideration has been given to a number of international problems. The document expresses a confidence that the fight against terrorism is possible only at Association of efforts of all world community. Russia and India expressed their firm support for the sovereignty, unity and territorial integrity of Syria.