MOSCOW, December 26. The President of Russia Vladimir Putin by his decree agreed to establish in Kaspiisk, Murmansk, Petropavlovsk-Kamchatsky, Simferopol, Yuzhno-Sakhalinsk operational headquarters in the marine areas to the fight against terrorism. This is stated in the document published on the official portal of legal information. 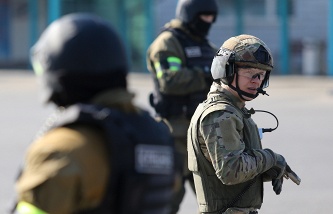 The Federation Council approved the law on the implementation of the FSB of weapons, special means and physical force

The Klintsevich: the proposal to revoke the citizenship of involvement in terrorism has no future

“To form in the cities of Kaspiisk, Murmansk, Petropavlovsk-Kamchatsky, Simferopol, Yuzhno-Sakhalinsk operational headquarters in marine areas (basins) for planning for the use of forces and means of Federal enforcement authorities and their territorial bodies on the fight against terrorism, management of counter-terrorism operations in the territorial sea, exclusive economic zone and on the continental shelf of the Russian Federation and in other Maritime space within which the Russian Federation exercises sovereignty, sovereign rights and jurisdiction and on vessels navigating under the State flag of the Russian Federation”, – stated in the decree.

According to the decree, the leaders of the operational headquarters in marine areas, if the Chairman of the National antiterrorist Committee (NAC) not otherwise agreed, ex officio are the heads of the border guard of the FSB in the areas of responsibility established by the head of the NAC.

In addition, Putin by his decree has assigned to operational headquarters in the constituent entities of the Russian Federation included in North Caucasus Federal district, a function in your planning application allocated forces and means of the United group of troops (forces) to conduct counter-terrorism operations on the territory of the North Caucasus Federal district.

The President instructed to form the operational group for the implementation of priority measures for the suppression of terrorist acts or actions that jeopardize their Commission.

The decree came into force from the day of its signing.