CHEBOKSARY, December 26. Staff closed the Cheboksary plant of Danon will be employed, the situation with the liquidation of a branch will not affect the milk market in the region. On Saturday the correspondent of TASS reported the press service of the administration of the head of Chuvashia.

“Dairy plant in Cheboksary demanded serious investments in modernization of production. The existing equipment was worn out, require urgent repairs and premises of the plant. Moreover, it was noted that the company does not meet stringent standards of environmental safety,” – noted in a press-service of the head of Chuvashia.

On Saturday it was reported that Danon closes two plants in Russia, located in the Tomsk and Cheboksary. The main reasons the company calls the technological deterioration of plants, their low profitability and falling sales. 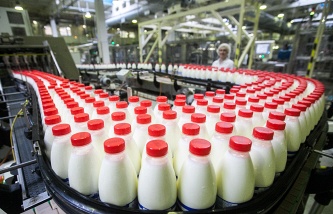 The Minister of economic development, industry and trade of region Vladimir Avilkin noted that the company in Cheboksary produced low-margin production, which did not bring any substantial revenue to the company.

“The company was not interested in upgrading equipment for the production of products with high added value. We have not seen substantial investment in the plant, which, of course, required the enterprise with 42 years of history,” he said.

The Minister added that the branch closing will not affect the milk market of the Republic. According to him, the share of commodity output Danon in Chuvashia is about 12%. “Residents of the Republic will not feel the loss, the shelves will be the same products as in stores it goes not directly, but from a logistics centre located in Kazan,” said Avilkin.

According to the press service of the head of Chuvashia, Cheboksary in connection with the closing of the plant under reduction will get about 140 people. The Minister of labour and social protection of the population Sergey Dimitriev said that the proposed dismissal “is under special attention”.

According to him, the company from December 28, it is planned to organize the place in which specialists of different departments will be consulted on labour legislation, employment of the population. The Minister said that the dismissed employees will be offered more than 5 thousand vacancies with the average salary from 10 to 40 thousand rubles, professional training demanded in the market profession due to the budget and citizens approaching retirement age – to take shape into early retirement.

The head of the city Leonid Cherkesov said that in the Chuvash Republic has 5 major dairies, which in recent years demonstrate a steady growth of production. He noted that experts have also released objectively of value to local agro-processing enterprises..

The government of Chuvashia is already negotiating about the implementation of investment projects on the court of Cheboksary city dairy plant where the plant Danone, said the press service. According to the head of the Ministry of economic development, a number of investors interested in purchasing industrial sites.

“Even during the work of Danone this site asked a number of investors. In particular, Italian companies that are planning to launch in Russia production of deep processing of milk”, – said the Minister.

The head of administration of Cheboksary Alexey Sadykov noticed that in place of the vacant industrial site of the plant will not be built any shopping malls and housing. “The uniqueness of the area is that there are special infrastructure, specially adapted for the operation of food processing facilities, designated and appropriate sanitary protection zone, so that a long stand waiting for a new investor, these production facilities do not have,” – said the official.

The Minister of agriculture of Chuvashia Sergey Artamonov said that the country produces 423 thousand tonnes of milk a year, including commercial milk – 330 thousand tons (80%). “Agricultural – suppliers Danon – will not remain without a market and high-quality raw milk will always be demand,” he said.

According to him, the group of companies Danone in Russia after a stop of industrial activity of the branch in the city of Cheboksary intends to continue cooperation with agricultural organizations – suppliers of raw materials under previously signed contracts.