MOSCOW, December 27. The competent authorities of the countries of the Organization of collective security Treaty (CSTO) in the course of this year expelled its member States more than 30 thousand illegal migrants. About it on air of TV channel “Russia 24” said the CSTO Secretary General Nikolay Bordyuzha. 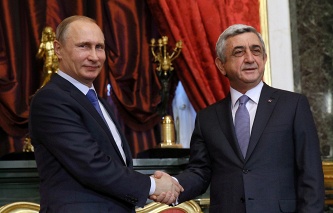 Sargsyan: the collective security Treaty organization have advocated the formation of a broad anti-terrorist coalition

“If we are talking about combating drug trafficking – 35 t on the circle we’re in the year revealed, have withdrawn them from use, or from transport and logistics chains of the drug mafia. If we are talking about illegal migration, more than 30 thousand citizens of third countries in the course of those operations that we conducted, were expelled from our territories who were illegally”, he said.

Bordyuzha reminded that in the framework of information security were identified more than 57 thousand websites of recruitment to the ranks of the terrorist organization “Islamic state” (banned in Russia). “50 thousand of them decided, for the remaining work,” he said.

For 2016, according to the Secretary General, CSTO member States planned “major doctrine in forming the special operations forces of the CSTO in Armenia.” “There will be separate teaching units of military intelligence on the territory of Tajikistan”, – he said.

The CSTO Secretary General stressed that the organization would have to create additional mechanisms to counter threats in the Central Asian region and “on distant approaches” – in Syria. According to Bordyuzha, the power structure of Afghanistan does not demonstrate a willingness to confront the terrorist threat and the countries of the CSTO “should be considered”.

“Today, I think the problem of Afghanistan from the point of view of the situation that develops there, it is impossible to solve”, – said Bordyuzha.”Whatever is said today by the representatives of NATO, the problem or the task they are set when you enter there contingent, they are not decided. The situation in Afghanistan is deteriorating,” said he. According to the CSTO Secretary General, 60% of the Tajik-Afghan border controlled by the Taliban.

Bordyuzha also noted that the CSTO member States anxiously watching the tense situation in Nagorno-Karabakh. He called to prevent escalation of the conflict – “today is a terrifying prospect, because it will blow up the whole Caucasus”.