MOSCOW, December 24. The cost of a set of products for the new year table in Russia for 11 months (December 2014 to November 2015) increased by 12.6%, said at a press conference the Deputy head of Rosstat George oxenoid.

However, according to the statistical office, the cost of Christmas buffet in Russia depends on the region.

According to Rosstat, the cost of a set of products for the new year table in Russia (based on family of four) in November amounted to 5.17 thousand, which is 12.6% more than in December 2014. “Festive table has risen in step with the growth of food prices,” – commented the Deputy head of Rosstat.

Last year, according to Rosstat, the average cost of the festive table in the Russian Federation amounted to 4050 rubles (an increase of 11.8% compared to 2013).

What has risen most strongly?

The most significant increase in prices from the new year collection of products showed oranges (they rose by 48%), canned fish (28,4%), pickled cucumbers and green peas (27%), mayonnaise (28%) and chocolate candy (24,%).

According to Rosstat, the cost of a set of products for preparation of salad “Olivier” for the same period rose by 15.5% to RUB 300,74 last year the traditional new year’s salad was worth on average 257,17 rubles.

Leaders of growth of prices for a standard Christmas products were mostly regions of the Far East and the Urals. According to the data of regional offices on the basis of the analysis of prices for food in local outlets, the minimum food basket for new year’s table in Vladivostok this year has risen in price in 1,5 times, in Khabarovsk – a quarter, on the Kamchatka Peninsula – almost 15%. In the Middle Urals festive table rose by 14%.

The far East will meet 2016 in the Moscow prices

Arrange a new year party residents of several regions of the Far East will be more expensive than the Muscovites. So the set of products for a holiday in Chukotka, according to Kamchatskaja, worth almost 7.3 thousand rubles. A resident of the Kamchatka region new year’s table will cost a little cheaper. “It is estimated that new year’s table the Kamchatskiy Krai residents will cost 6 thousand rubles 306. The amount calculated for a family of four people”, – reported in management of the state statistics on the Kamchatka edge (Kamchatska). 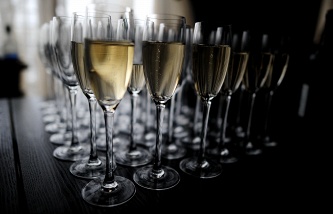 Thus the interlocutor of the Agency noted that the residents of Moscow new year’s table will cost 6 thousand 443 ruble – only 140 rubles more than the inhabitants of Kamchatka.

In Vladivostok the minimum grocery set on new year will cost 2.5 thousand rubles (10 thousand for a family of four people) despite the fact that a year ago you could set the table, spending 1,5 thousand person, have informed in the regional Department of state Statistics.

The starting price of the minimum set of products for new year’s table in Khabarovsk in 2015 per person increased from 1.5 to 1.7 thousand rubles in 2014 to 2 thousand this year.

The minimum cost of the ingredients for “Herring under a fur coat” in the regions of the Far East starts from 200-250 rubles, the ingredients for Olivier are an average of 400 rubles, a kilogram of mandarins in Khabarovsk you can buy from 90 rubles in Vladivostok – from 170 rubles.

The most expensive on new year’s table will be fish dishes, despite the fact that they will not have to drive from afar – kilogram of caviar in Khabarovsk you can buy from 1,7 thousand rubles, Vladivostok – from 2 thousand rubles, a kilogram of smoked fish – from 400 to 600 rubles. A bottle of sparkling wine, the inhabitants of the Far East can buy from 150-180 rubles in Khabarovsk and from $ 210 to Kamchatka.

According to the Ural branch X5 Retail Group, food for new year’s table will be mostly domestic. “In December this year, the proportion of domestic vegetables on the shelves of the Sverdlovsk region is on the order of 99 per cent,” the company said.

Holiday table for the resident of the Middle Urals, which includes pickles, red caviar, salami, smoked fish and meats, dumplings, cheese, vegetables, fruit, water, juice, bread, candy, mayonnaise, champagne and vodka, will cost 2.5 thousand rubles per person, which is 14% above last year’s prices. “This is an average figure. That is how much was the total growth of food prices in the region compared to the same period last year. Most rose oil, tea and seafood, particularly herring and deli foods, by almost 20%, sugar, salt and alcohol – 15%,” – said in Sverdlovskaja.

The Crimea will offer its residents various options of sparkling local wine – some brands in local stores, you can buy with a Christmas discount. So, a bottle of “Golden beam” in the Crimean stores you can buy shares for 199 rubles, a bottle of “Legends of the Crimea” – 300 rubles. Sparkling wine of different kinds from the company “Inkerman” in the Crimean stores you can buy average 350-400 rubles per bottle. Slightly more expensive cost champagne one of the oldest Crimean plants “New world” – in stores a bottle of wine of this brand cost from 500 to 900 rubles. 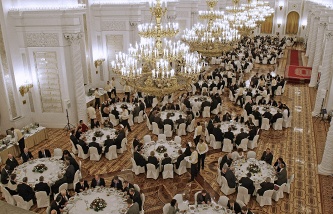 Sands: new year corporate party for the employees of the presidential administration will not be

Buy Crimean vegetables will allow residents to save on “Olivier” salad – the ingredients for this salad on the Peninsula will cost about 300 rubles, while in Moscow – this salad can cost about 700 rubles, Yamal – about 900 rubles.

However, products for new year’s table, which are imported to the Peninsula from the mainland, the local shops are more expensive. Salted herring for another favorite salad of new year Crimeans will cost an average of 220 rubles per kilogram. Bananas – about 100 rubles per kilogram, oranges and tangerines from 90 to 120 rubles, pineapple – 450 roubles apiece. A small cake for the festive table, you can buy average of 300 rubles, cake with butter cream for 30-50 rubles.

In Kaliningrad components for “Olivier” and “Herring under a fur coat” will also be comparatively inexpensive. Two kg of selected potatoes that can be purchased for 38 rubles, carrots, onions, beets will cost in the range of 25-30 rubles per kilogram, the standard Bank of green peas and a dozen eggs will cost up to 50 rubles, 200 grams of the herring – from 115 rubles, a kilogram of “Doctor” – about 200 rubles.

Fish and red caviar to the South and West of the country will cost more than the far East. In Kaliningrad and Crimea in 130-gram jar of caviar will have to pay 389-481 ruble. But the fruit here is cheaper a kilo of tangerines and oranges is in the range from 85 to 120 rubles.

The average cost of Christmas buffet in Kaliningrad will be 3 thousand rubles per person given the fact that everything necessary will be acquired in the stores. But for this money it is possible to additionally buy juice and sweets for the festive table.

In Nizhny Novgorod budget new year’s table will cost 1.2 thousand per person with the average salary in Nizhny Novgorod on 26 thousand rubles. In the minimal set is “Olivier”, “Herring under a fur coat”, pork or chicken for the main course, Mandarin and Russian champagne.

The family with average income can afford an extended set, where, in addition to salads, will include, for example, sandwiches with red caviar (the price varies from 260 to 550 rubles per can), jellied meat (will cost about 600-800 rubles), fish in aspic (fresh perch can be bought for 220 rubles per kilogram), duck with apples (540 rubles), meat, cheese and fish plates, as well as a fruit basket, wine and liquor, sweets. This new year’s eve menu will pull already for 6-8 thousand rubles per person.

Stavropol grocery basket is cheaper than the national average

According to Stavropolskaja, the cost of the minimum grocery set of 33 items per person in the Stavropol region now amounts to almost 3.3 thousand, which is 7% above the data at the beginning of the year. “In Russia and the North Caucasus Federal district this index amounts to, respectively, 3 ,55 thousand (growth by 6.9%) and 3,36 thousand (an increase of 9%), respectively,” reported the regional management of statistics.

Fell a bit in the Stavropol region to the New year’s eve pork (277 rubles per kilo), chicken (137 rubles per kilogram), potatoes (22 rubles per kilogram). However, on the background of growth of the price of other products, portion “Olivier” for new year’s table this year will cost Stavropol is still more expensive. According to some media, it would cost almost 380 rubles, which is almost one hundred and fifty rubles more than last year’s festive night.

However, the portal agro2b.ru that is traditionally all-Russian rating “Olivier”, noted that “Olivier” for a meeting 2016 for residents of Novosibirsk rose by almost 17%.

In the markets of Ingushetia, where the majority of ordinary residents to buy food, before the New year the prices of some products have increased by 10-25%. According to the observations of local residents, cucumbers cost a week ago 120-140 rubles per kilogram, now it is 160-200 pounds of tomatoes before you could buy it for 140-150 rubles, now – for 180-220. Rose and fruit prices on average by 20-30 rubles, 3-5% rose confectionery. “Such price increases – the traditional race in the holidays and traditional winter vegetables and fruits. The demand and respectively the owners of trading places raise prices,” – said in the administration of the Central covered market in Nazran.

And this despite the fact that the cost of the minimum set of foodstuff in the Republic at the beginning of December amounted to almost 3.5 thousand rubles, which is 579 rubles more than in December last year.

In General, the majority of regions States that they are able to keep prices on food in anticipation of the New year.

“On the eve of New year price increases for food products is not expected except in fruit and vegetable prices (up 5%), which is associated not only with pre-holiday excitement, but with a seasonal factor”, – said the head of the Department of economy, trade and price monitoring of the Ministry of economic, territorial development and trade of Chechnya Rumia Askhabov.

In Chechnya New year is celebrated in all families. The most popular holiday in the Republic Eid al Adha. In addition, in the region limited the sale of liquor, which is sold only in specialty stores from 8 to 10 o’clock in the morning.

In the regions of Russia, in order to avoid speculative price increases in the last week of the year, organize pre-new year fairs and weekend markets, where fresh food can be bought at prices 10-15% below market.

With the exception, perhaps, will be the only North Ossetia, where just before New year’s for security purposes, close the bazaars. But in the Republic on the eve of the feast of reduced prices on several products and carry out the action, which in the supermarket to buy a loaf of bread in just 1 ruble.

According to Rosstat, in Moscow the cost of a Christmas food basket grew by 13.9%, in St. Petersburg by 16.1%.

The maximum value of the set of products for a festive table recorded in the Chukotka Autonomous district and is 7.28 thousand rubles.