MOSCOW, December 28. “Gazprom drilling” received the contract of “Gazprom” for the drilling of gas production wells at the Chayandinskoye field in Yakutia – resource base “forces of Siberia”. The contract is worth 39 billion rubles this is stated in the materials of public procurement. 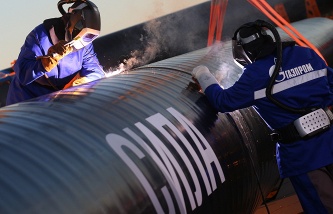 “Gazprom” has 20 billion rubles. for delivery of cargoes on the resource base “forces of Siberia”

The tender drawn closed method – “Gazprom drilling” was the only bidder. Terms and volumes of works are not disclosed.

Earlier “Gazprom Drilling” has already won a number of tenders for the Chayandinskoye field pre-development, in particular, the company received the contract for the construction of appraisal wells for RUB 1 billion, as well as for drilling oil and gas wells on a 4,979 billion rubles.

The Chayandinskoye field is the resource base of the trunk gas pipeline Power of Siberia by reserves (categories C1+C2) belongs to the category of unique: of the order of 1.45 trillion cubic meters of gas and about 93 million tons of liquid hydrocarbons (recoverable). At full development at the field will be producing up to 25 billion cubic meters of gas and at least 1.5 million tons of oil per year. The beginning of gas production in the Chayandinskoye field is scheduled for the end of 2018.

“Gazprom drilling” it used to be a subsidiary company of “Gazprom”. In 2011, within the framework of the liberation of Gazprom’s non-core assets the company was sold at auction. Until the fall of 2014, 100% of the company belonged to structures of the businessman Arkady Rotenberg. In October 2014 it became known that he sold the company to his son, Igor Rotenberg.