ST. PETERSBURG, on December 28. The affiliated structure of Sberbank and consulting company Strategy Partners Group – developed the concept of the world trade center on the site of Pulkovo-2, said the Governor of St. Petersburg Georgy Poltavchenko in an interview to the leading Russian news agencies.

“Strategy Partners Group has developed a concept which involves the establishment of a centre of international trade. There will be Convention and exhibition, office, retail and warehouse facilities. We consider this concept, it is at the stage of pre-project preparation. The investor may be just the company that this concept offered,” he said. 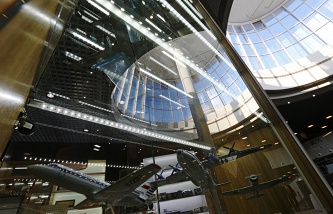 Smolny asked about the “open skies” to Pulkovo

The authorities of St. Petersburg at the St. Petersburg international economic forum 2015 proposed new zone with a special regime of economic activity on the land area of 9.7 hectares around the airport terminal Pulkovo-2, which was closed in March 2014. The project is valued at €163 million are planned by 2020.

It will be an international centre within the boundaries of the Pulkovo airport. His main message in the buffer space where foreigners can stay without a Russian visa within 72 hours, and the so-called zone tax free. To get into it from St. Petersburg, you need to have a passport, and air passengers arriving in St. Petersburg for a business event, you will not need to get Russian visa, because the activities will be conducted in the buffer zone. The idea is to “create a business space that would allow St. Petersburg to position itself as a business center of the country and as an international centre,” said Poltavchenko.

It is assumed that the control area will be created or hired by the company. The payback period is 11 years.

Pulkovo 2 is used as the international terminal of St. Petersburg. At the moment there was only business aviation. Since spring 2014 other flights were transferred to a new modern terminal built near Pulkovo-1 (approximately 6 km from Pulkovo-2). At the end of 2014, the concessionaire NCG, which leads the reconstruction of the airport, transferred Pulkovo-2 to city property as no plans to use it for aviation.