MOSCOW, December 28. Portfolio of foreign orders “Rosatom” on the 10-year period by the end of 2015 exceeded $110 billion, said a source in the state Corporation. 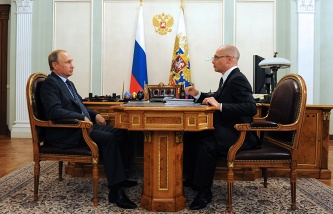 The portfolio of orders is formed not only by contracts for the construction of new nuclear power stations, but supplies of enriched uranium, natural uranium, nuclear fuel contracts in the field service maintenance and supply of equipment.

The portfolio of foreign projects of Rosatom for the beginning of 2015 was $101,4 billion.

As stated earlier the first Deputy head of “Rosatom” Kirill Komarov, the Corporation expects in the next five years to sign foreign contracts for the construction of new power units, totalling some 30 to 40 new nuclear power plants construction abroad.

Moscow and Cairo signed an intergovernmental agreement on construction in the Arab Republic NPP, comprising four power units of 1200 MW each by 19 November 2015. The station will be built on the site near Dabaa. Survey work at the NPP site in Egypt, “Rosatom” planned to begin in December 2015.

Other news on the topic

Media: Russia will provide Egypt with a loan for the construction of the first NPP in the amount of $25 billion

Media: the construction of 4 reactors of the first Egyptian NPP will cost $10 billion

Countries also agreed on granting the Russian state export credit for the project in the amount of $25 billion Egypt expects that power generation at the first unit nuclear power plant in Dabaa will begin in 2024. As reported previously, the newspaper “al-Akhbar”, the country has already started to work engineers and geologists, and by the end of December, the number of Russian experts will be 39 people. They, in particular, will be engaged in research to determine the boundaries of future project engineering and its coordinates.

NPP will be built on the Northern coast of the country, 3.5 km from the Mediterranean sea in the area from 149 to 164 km of motorway near the town of El-Alamein.

With the assistance of the Russian Federation in India has already built and put into commercial operation the first unit of NPP “Kudankulam”. The construction of the second is also complete, and in the near future he should be launched. Only Russia plans to build in India up to 16 nuclear reactors in different regions of the country.

“Rosatom” in December 2015, also signed a program of localization of production in India for nuclear power plants of Russian design. As stated earlier, the President of the Russian Federation Vladimir Putin, reached agreement on the allocation of the Indian side is another site for the construction of power units of Russian design.

As it became known from materials procurement, VTB Bank opened a credit line for Rosatom to 30 billion rubles. Funds will be used to Finance subsidiaries of the Corporation – Atomenergoprom. To raise funds Rosatom has announced a tender, which was attended by VTB, Gazprombank and Alfa-Bank. The winner of VTB.

The line of credit will be granted for 5 years, with interest on the loan under the terms of the contract may not exceed 17,766 billion.

Earlier it was reported that Atomenergoprom is planning to conclude with Sberbank the agreement to attract overdraft credit of up to $ 10 billion. The credit period not exceeding 12 months. Atomenergoprom is an integrated company consolidating civil assets of Rosatom. The company provides full production cycle in nuclear power engineering – from uranium mining to NPP construction and electricity generation.