SEVASTOPOL, December 29. Alexey Chaly said at a session of the legislative Assembly of Sevastopol, he is retiring. This was reported by his adviser Alexei Filimonov.

“Alexis said that last year and a half in Sevastopol nothing had been done to implement the concept of city development. He suggested the second number in the list of “United Russia” (Governor of Sevastopol Sergei Menyailo – approx.) to analyze the situation and make appropriate conclusions”, – said Filimonov.

The resignation of Alexei Chaly to the post of Chairman of the legislative Assembly of Sevastopol was a surprise for the Governor of the city Sergey meniailo.

“For me, as for you, it was a surprise. I got a call on the phone. I have not heard his statement and cannot comment,” he told reporters Menyailo.

Alexey Chaly has been elected Chairman of the legislative Assembly of Sevastopol September 22, 2014. 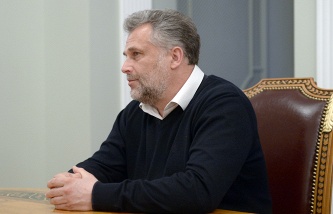 Following the elections on 14 September, “United Russia” has received in the legislative Assembly of the city’s 22 seats out of 24.

Chaly, in the past, the General Director of industrial group “Tavrida Elektrik”, was elected “people’s mayor” at a mass rally on 23 February, which marked the beginning of the “Russian spring”.

1 through April 14, was the acting Governor of Sevastopol, and then headed the Agency for strategic development of Sevastopol.