MOSCOW, December 29. “Gazprom” has cancelled the tender for the construction of 822 km of the main gas pipeline “Power of Siberia” to 156 billion rubles this is stated in the materials of public procurement.

We analyzed this tender. I sent a letter to Alexei Borisovich Miller with a very harsh criticism of this tender. There violated all the law and the law on competition, and 223 of the act, and everything else. We did a few days ago. And if he does not respond, we will think what to do next

Igor Artemyev
The head of FAS

At the end of November 2015, Gazprom announced a tender for the construction of four sections of the gas pipeline “Power of Siberia” with a total length of 822 km in the amount 155,9 billion rubles. Lot includes contracts for construction of sections of “Lensk – COP-1 “Salicilizma”, “COP-1 “Salicilizma” – COP 2 “Olekminsky”, “KS-2 “Olekma” – CS-3 “Amginsky” and “CS-3 “Amginsky” – KS-4 “Nemirsky”. The construction will involve subcontractors from the number of small and medium-sized businesses, indicated in the documents.

Earlier it was reported that the head of FAS Russia Igor Artemyev had sent a letter critical of the tender “Gazprom” and plans to report on the situation to Russian President Vladimir Putin.

At present Gazprom is engaged in the construction of the gas pipeline “Power of Siberia”, by which gas from Eastern Siberian fields (Chayandinskoye in Yakutia and the Kovykta in the Irkutsk region) will be transported on the domestic market (via Khabarovsk to Vladivostok), and for export to China. 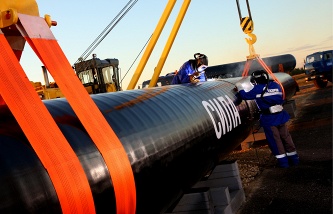 The Deputy head of CNPC: deliveries of Russian gas to China could reach 100 billion cubic meters per year

According to the contract signed on may 21, 2014 Gazprom and China national petroleum Corporation (China National Petroleum Corporation, CNPC), the Eastern route will provide 38 billion cubic meters of gas a year for 30 years. Contract amount – $400 billion.

Terms of partnership in the design, construction and operation of cross-border areas of the pipeline has determined the intergovernmental agreement dated October 13, 2014.