KIEV, December 29. The Ministry of economic development and trade of Ukraine has prepared a list of Russian food products, import of which to the country will be banned from January 10, 2016. About it reported in a press-Department service. 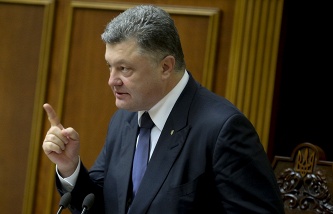 The list of 43 types of goods. In particular, it is prohibited to import bakery, pastry, chocolates, meat, fish, coffee, black tea, baby food, filter cigarettes, beer, vodka, and a range of other products.

Earlier the President of Ukraine Petro Poroshenko has signed the law “On foreign economic activity”, which gives the government powers to apply economic sanctions against Russia.

The Ukrainian Parliament adopted the law on 24 December. In accordance with the document, the Cabinet of Ministers of Ukraine may take “additional measures” in case of “discriminatory or unfriendly actions on the part of the state, the Verkhovna Rada recognized as an aggressor”. In particular, the government will be in a position to impose “a ban on foreign trade restrictions, or limitations”, and also to cancel tariff preferences.