MOSCOW, December 29. Prime Minister Dmitry Medvedev took the decision to continue programs of support of demand for cars next year, until the 1st half of 2016 in the amount of 20 billion rubles. About it on air of TV channel “Russia 24” said the Minister of industry and trade Denis Manturov. 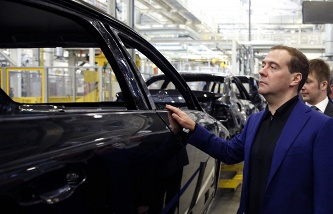 “As for the auto industry, approved by the Chairman of the government’s decision to continue this programme supporting demand for the next year. And from January 1, our auto industry will participate in the continuation of this program. This, again, and preferential leasing, and promotion of car loans, and the maintenance of demand through the recycling program and trade-in. Until the decision is made at the half year worth about 20 billion roubles. Well, it will depend on how will develop the market of production,” he said.

Manturov stressed that the support measures of a financial nature that were provided in 2015, the automotive industry, allowed to reduce the drop from an estimated 50% to about 23-24%. “This had a significant impact on the reduction of decay. As volumes and production, and the volume of the market, when the market of 1.6 million units of cars sold this year, almost 600 thousand cars were in varying degrees profinansirovali by the state,” said Mantrov.

“A significant measure of support was due to the payment of interest on loans for working assets (working capital – ed.). In total that subsidy received 187 enterprises in the amount of 6 billion rubles. We hope very much that the government also adopted a decision on the continuation of this subsidy for the next year”, – said the Minister.

The Ministry of industry and trade in the crisis and aggravated against this background, the situation on the market has taken a series of measures aimed at maintaining sales. In particular, the Ministry shall reimburse the automakers part of the expenses directed on modernization of production, support jobs, etc. These support measures will continue, the Minister said.

Separately, the Ministry supported the demand for automobiles through the implementation of the recycling program, trade-in, leasing and preferential preferential car loans. For these purposes in 2015 from the state budget was allocated 24 billion rubles.