The new article establishes the list of grounds for the recognition to be uncollectible unpaid administrative fines and other payments to the budget, which taxes, charges, customs duties and insurance contributions. 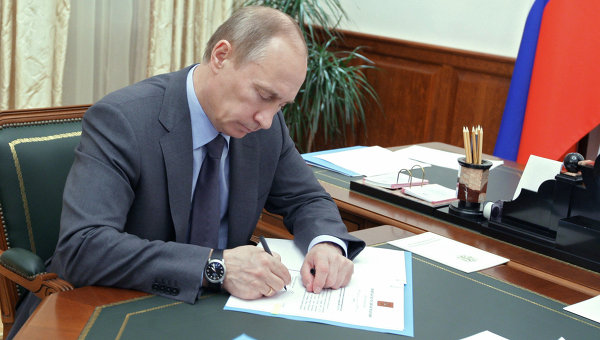 MOSCOW, 29 Dec. The President of Russia Vladimir Putin has signed a law aimed at establishing the rules for recognition of bad debts on payments in the budget, the corresponding document posted on the President’s website.

“In order to resolve issues of recognition of unpaid payments to the budget to be uncollectible, the Budget code of the Russian Federation is supplemented with new article, which establishes grounds for recognition to be uncollectible unpaid administrative fines and other payments to the budget, not the taxes and levies, customs charges, insurance premiums,” — said in reference to the document.

To be uncollectible, it is proposed to accept the administrative penalties, not paid as of 1 January 2015, legal entities that meet the signs of inactive legal entity.

Administrators of budget revenues shall be empowered to make decisions on the recognition to be uncollectible and written off in the accounting of payment to the budget. The subjects of the Russian Federation can set additional requirements to credit organizations, which can be placed temporarily available funds of regional budgets.

The bill also introduces amendments allowing the bodies of state (municipal) financial control is to monitor the achievement of the Manager and recipient of the budget provided by intergovernmental transfers, targets (indicators) and the specified outcomes of their use.