MOSCOW, December 30. The impression that “Western partners are trying to hide a complete inability to discipline their wards in Kiev for modest procedures associated with the extension of sanctions against Russia.” 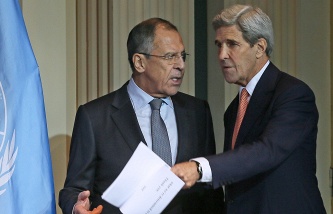 This opinion was expressed by Minister of foreign Affairs of the Russian Federation Sergey Lavrov in interview to TV channel “Star”.

Answering the question about why they do it, Lavrov reminded that “the President of Russia Vladimir Putin in the film “the world Order,” said the sharply increased European dependence on the United States.” “This fact concerns not only the Ukrainian situation, it manifests itself in many other events of world politics”, – noted the Minister.

“During the meetings of U.S. President Barack Obama with Russian President Vladimir Putin, U.S. Secretary of state John Kerry with me, our American colleagues spoke have no particular interest in keeping this crisis and support the Minsk agreement that really worked with the Verkhovna Rada to something recorded on the special status of Donbass. It’s difficult for me to question the sincerity of the words of U.S. President Barack Obama, who, looking in the face of Russian President Vladimir Putin, has expressed its willingness to help, – said Lavrov. – While neither they nor the Europeans do not get.”

“What was done with the rules of the International monetary Fund, is generally not in any gate not climbing, – said the head of the Russian foreign Ministry. – Punished by the old rules Greece, Ireland and several other countries, I’m talking only about the EU, not even mentioning Argentina and other “large debtors” in the third world, and for Ukraine, and took, and took one of the cornerstones of the “buildings” of the International monetary Fund”.