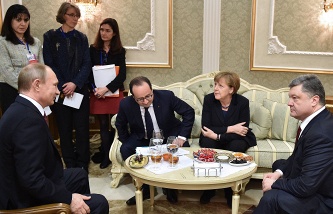 He added that the results of the conversation, the Kremlin will inform journalists. Peskov noted that “generally, these conversations last for some time and are associated with the need for translation and so forth.”

“Normandy format” has traditionally been used by the leaders of the four countries to discuss Ukrainian issues. Now one of the most acute problems in this field is the expiration of the agreement on Ukraine, called “Minsk-2”, and the leaders will decide about their fate. Meanwhile, Putin repeatedly stressed that Russia does not see any alternatives to this package.