MOSCOW, December 31. Four automobile plant, engaged in Russia assemble cars, Petersburg Toyota and Nissan, Ulyanovsk UAZ and AVTOVAZ from December 31 to go for the new year holidays, from January 1, they are joined Nizhny Novgorod “GAZ Group”. Most of these plants right after the Russian holidays will continue to relax, but as part of a corporate vacations.

The number of working days in the factories of leading auto companies began actively to fall in 2015 following the decline in purchasing power – plants this year has introduced an additional corporate vacation, reduced work weeks, and the American GM does decide to leave the Russian market to improve the economic situation.

The longest holiday will be the employees of Ulyanovsk automobile plant. “On 11 January, right after new year’s Federal holidays, venture out into the corporate vacation until January 31,” – said the press service of the Oise.

Employees of the Gorky automobile plant will come back to work one week early on January 26. “Traditional annual two-week vacation GAS represents the employees of production and functional services from 11 to 25 January 2016,” said the automaker, noting that corporate employees leave in accordance with labour legislation is the next fully paid vacation agreed with trade Union Committee.

AVTOVAZ will resume on January 18. “From December 31 to January 10, the plant will be on Christmas vacation from 11 to 17 January in winter corporate holiday”, – said the press center of “AVTOVAZ”. One day later begin the production and employees of the Tolyatti factory of the Russian-American JV GM-AVTOVAZ who are on holiday from 24 December.

Extend the new year holidays decided and Japanese Nissan, whose factory is located in St. Petersburg. The plant “Nissan manufacturing Rus” informed the authorities of St. Petersburg of simple from December 31 to January 15, this period will not operate 1 thousand 214 people. Nissan previously planned to rest from 1 to 10 January, but then decided to take an extra five days of vacation. The reason of optimization of number of staff, reported to the employment service of the city.

The plant of Japanese automaker Toyota in St.-Petersburg became an exception to the rule – the company’s employees come to work, like the majority of Russians – on January 11. “The dates of the Christmas holidays of the plant “Toyota” in St. Petersburg remained unchanged from 31 December 2015 to 10 January 2016″, – have informed in a press-service of branch of OOO “Toyota Motor” in St. Petersburg.

In the days of downtime will fix the equipment

The company did emphasize that corporate holiday for employees of plants are traditional at this time there is an upgrade or preventative maintenance of equipment. However, for example, “AVTOVAZ”, in the year to low purchasing power corporate extended leave from three to four weeks and for the first time sent its workers on vacation in the winter. All employees of “AVTOVAZ” in 2015, taking into account national and corporate weekend vacationing three times – from 1 to 18 January, 1 and 11 may and 27 July to 16 August.

After leaving the corporate holidays of the company will resume operation in a normal mode. So, UAZ keeps plans from 1 February 2016 to start production of an updated “hunter”, and from September 1 to the production of the new car “the Patriot” with airbags and cruise control.

Foreign factories in Russia had a rest until the New year

The factories of foreign automakers was done on winter corporate holidays until the New year. Ford Sollers on November 18 sent on vacation at once two Russian Assembly plant for cars – Vsevolozhsky Assembly plant of Ford Focus and Ford Mondeo and Assembly plant of Ford Fiesta and Ford EcoSport in Naberezhnye Chelny. From 15 December on vacation left the staff of the Ford Sollers plant in Elabuga. The issue of “Ford” in Leningrad region it is planned to resume on January 15. The plant Ford Sollers in Naberezhnye Chelny and Elabuga goes with the holidays on January 11.

Corporate holiday Kaluga of Volkswagen and “PSMA Rus”, producing cars Peugeot, Citroen and Mitsubishi launched on December 21. Will resume production plants, according to the plans, 11 January 2016.

Nissan and “AVTOVAZ” will reduce working hours in 2016

From March 2016 Nissan plant in St. Petersburg will go to work in one shift, slashing 500 jobs, reported by the company. “AVTOVAZ” to keep jobs from February 15, 2016 for six months will switch to four-day work week for a period of six months. 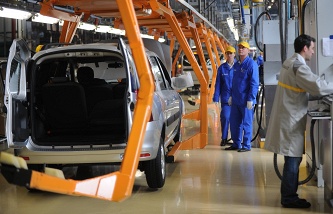 Despite the economic situation in the country, AVTOVAZ in 2016, plans to keep its stake at 36%.

As stated in December, the President of “AVTOVAZ” Bo Andersson, the production volumes by the end of 2015 should be about 470 thousand cars, which is 14% less than in 2014. This includes as the LADA cars, and cars produced by “AVTOVAZ” for the Alliance “Renault-Nissan”. According to Andersson, the automobile market in 2015 decreased by 35%. The share of Togliatti auto giant in 2015, accounting for 36% of all produced passenger cars versus 30% a year earlier.