MOSCOW, December 31. The Governor of the Chelyabinsk region Boris Dubrovsky signed a decree about the dismissal of Ivan Senichev with the position of the Deputy. On Thursday reported on the website of the regional government. 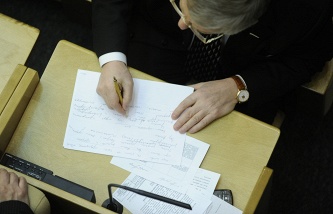 Source: the Deputy Governor, obscenely responded about the Chelyabinsk region, has resigned

“Fire Senicheva Ivan Viktorovich, Vice-Governor of the Chelyabinsk region, on 11 January 2016 to terminate the employment contract by the employee in accordance with paragraph 3 of part 1 of article 77 of the Labour code of the Russian Federation”, – stated in the message.

At the end of October in the media was widespread recording of telephone conversation Senicheva, according to which the Deputy Governor obscenely responded about their region and threatened to close the chop “Python”, if the disposal area will not be transferred to two expensive car. This happened about a month after Senichev initiated the termination of the contract with the security company. December 7, Deputy Governor out of extended leave without pay, which was sent by the Governor Boris Dubrovskiy after scandal with audio recording.

According to the press Secretary of the head of region Oleg Grishankov, the investigators refused to Institute criminal proceedings by results of check the Deputy Governor of the conversation with the representative of the security company.