The history of new year and Christmas appeals of the leaders to the peoples of their countries has more than 80 years.

The first monarch who appealed with a Christmas radio message to the nation, was a British king George V in 1932. Since 1939 Christmas radio addresses became traditional. The first address Queen Elizabeth II was broadcast on radio in 1952 and on TV – in 1957. The first television broadcast of Christmas and new year appeals was held in Germany in 1952. In the years from 1949-1969 Christmas speech was made by the Chancellor, and Christmas – President, and from 1970 – on the contrary.

The tradition of television Christmas references was introduced in 1970, the General Secretary of the CPSU Leonid Brezhnev. Since the second half of the 1970s, his greeting speech was read by the announcer Igor Kirillov.

On 31 December 1991 the country was congratulated by the satirist Mikhail Zadornov. He missed out on the timing, which broadcast the chimes were detained for a minute.

The next eight years to the citizens addressed the President of Russia Boris Yeltsin. He was the first leaders of the state appeared on TV with a glass of champagne, and in 1997 in the movie Christmas greeting was attended by his family.

31 December 1999, the Russians congratulated twice, the outgoing Boris Yeltsin and was appointed as acting head of state Vladimir Putin.

In 2000-2007 the recording of the greetings of Vladimir Putin was not in his office, and the Ivanovo area of the Kremlin. President Dmitry Medvedev in 2008-2011 recorded on the Patriarchal bridge.

In 2013, the Russians saw two new year greetings of President Vladimir Putin. The Far East was shown a recording made a few days before 31 December. In the rest of Russia went on the air a letter that the President wrote in Khabarovsk, where he arrived on 31 December to support the flood victims. The text of the second speech has been modified in connection with the terrorist attacks in Volgograd on 29 and 30 December, which killed 34 people. This record for the first time in 13 years was made not on the street, and in a room in the city Palace of culture during the new year’s reception. 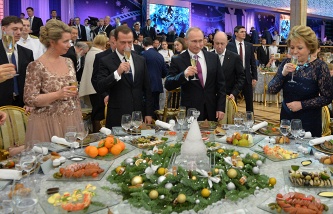 31 December 2014 shooting new year’s address of Vladimir Putin was held in the gallery of the Cathedral of Christ the Saviour with a view of the Moscow Kremlin.

After congratulations from the head of the state TV and radio at midnight broadcast time signal is the chiming clock of the Spasskaya tower of the Kremlin, which marks the beginning of the new year. After this signal turns the national anthem.

As we celebrated the New year in the USSR