BISHKEK, December 31. /Corr. Vadim Neshkumai/. The government of Kyrgyzstan at the meeting made the decision on denunciation of the agreement with Russia on joint construction of the upper Naryn HPP cascade.

About it reported in a press-service of the Cabinet of Ministers of the Republic.

“At a Cabinet meeting adopted a draft decree, which will approve the national Parliament of the country”, – said the press Secretary of the Cabinet Nazira Akhmedova. According to her, the question of denunciation of agreements with Russia on this issue would be discussed in Parliament next year.

Intergovernmental agreement between Russia and Kyrgyzstan was signed on 20 October 2012 in Bishkek. According to the agreement, the parties were to build a cascade HPP on a parity basis. The same principle would be preserved even after input of objects in operation. 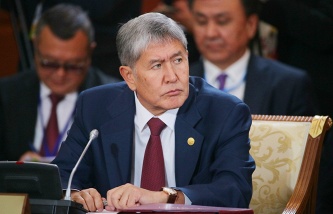 The President of Kyrgyzstan: several agreements with Russia, apparently, will not be realized

“In a situation when Russia’s economy is on the rise, it is clear that these agreements will not be fulfilled,” he said. However, Kyrgyzstan in this situation, “has no right to suspend these projects,” so the Republic does not exclude the option of finding new investors. “Unfortunately, our Russian friends while these projects cannot make by – said Atambayev. – For us it’s too bad, because now again have to go looking for investors and try to persuade them.”

According to the President of Kyrgyzstan, it its position on this issue was voiced during a meeting with Russian President Vladimir Putin and found him “full understanding of the situation”. “The President of Russia, with which we have close relations, understood me correctly, – said Atambayev. – He understands how these objects are important to us.” Atambayev also said that the refusal to cooperate with Russia on these projects will be a “bitter thing”.

“But we are also to blame, it was necessary to speed up the process of land allocation under construction, while Russia’s economy was on the rise,” concluded the President of Kyrgyzstan.

Earlier it was reported that the upper Naryn cascade HPP will consist of four hydroelectric power stations: Akbulunskaya HPP, narynskaya HPP-1, Naryn HPP-2 and Naryn HPP-3 with a total capacity of 237.7 MW and generation 942,4 million kW/h.

HPP will be built within 6 years.

The first stations will be commissioned in 3 years.