MOSCOW, December 31. Holding “Gazprom-media” has made a number of appointments in the leadership of their companies.

As stated in the holding, to the post of head of division “Gazprom-media Match” appointed Dmitry Granov, in different years headed the company “AMEDIA” and “Prof-media Business Solutions”.

“In the area of responsibility Granova include the development of a recently established sports media company that includes sports channel “Match TV”, a package of premium sports channels, the Internet portal Sportbox and mobile applications”, – stated in the message. 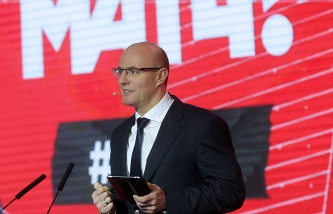 Dmitry Chernyshenko: “Gazprom-media” satisfied with the first month of operation of the channel “Match TV”

CEO of satellite operator “NTV-Plus” appointed Mikhail Demin, previously held in the company as Deputy CEO. “The priorities in Demin General Director “NTV-Plus” will be cost optimization, including, in the content and improving the quality of customer service”, is given in the message words of the General Director of JSC “Gazprom-media holding” Dmitry Chernyshenko.

Previously held the position of General Director of”NTV-Plus” Alexander Vronsky decided to leave the company and plans to implement their own projects.

In the message it was explained that, to date, in “Gazprom-media” have completed the formation of a number of holdings, including sub-holding “Gazprom-media Match”. In particular, sports broadcasting and production of premium sports channels that were previously part of the business “NTV-Plus”, now transferred to the management company “PMG Match”.

“This will more effectively monetize sports rights in all environments, and the operator “NTV-Plus” to focus on core business working in the market satellite TV”, – said Chernyshenko.