SIMFEROPOL, January 5. Residents of Henichesk in the Kherson region of Ukraine “no luck with the country”. So the head of the Crimea Sergey Aksenov commented on the beginning of deliveries of Russian gas from the Peninsula to the South of the neighboring country. 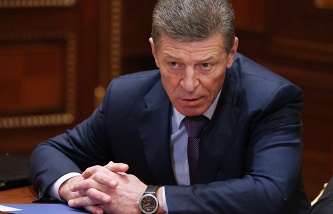 Aksyonov recalled that the gas supplied from Crimea to southern Ukraine last year. “Then put about 330 thousand cubic meters of gas to Genichesk, he said. – This year the same way, when I received a request to help our neighbors in difficult period, I reported to the leadership of our country. The President has decided to resume delivery”.

According to the head of the Crimea, in Henichesk already shipped about 14 thousand cubic meters of gas. “They have the system pressure has doubled, I just heard from the leaders of “Chernomorneftegaz”. And the fact that they all turned on its head – it’s really common for the Ukrainian propaganda machine. They lie raised to the rank of state policy. Don’t worry about it”, he said the denial of supplies of Russian gas by Naftogaz.

The order of the President of the Russian Federation

Russian “Chernomorneftegaz” (the Crimea) has started supplying gas to the city of Genichesk of the Kherson region in southern Ukraine on 4 January.

Yatsenyuk: Ukraine enough gas for the winter, but there is a shortage of coal

Media: gas reserves in Ukraine for a week of frosts declined by almost 5%

In Ukraine high-speed train “frozen” on the way to Kiev

Deliveries are arranged by order of the President of Russia Vladimir Putin at the request of the mayor of Genichesk.

As explained to journalists the head of “Chernomorneftegaz” Igor Shabanov, daily volume of supplies will amount to 20 thousand cubic meters, depending on weather and consumption. According to him, gas supply from the territory of Crimea will be carried out during cold weather to compensate for peak consumption settlements near Genichesk. The head of “Chernomorneftegaz” will not comment on the issue of payment for gas delivered.

Why Henichesk remained without gas

More than 1.5 thousand residents of Genichesk were left without gas due to severe frosts. January 2 in the city due to lowering the air temperature below -14 degrees and limited capacity of gas Small field there was decrease in the pressure in the municipal pipeline.

Henichesk district, Kherson region receives gas from Small fields, but in the winter in reverse mode, the gas is further passed from the Crimea.