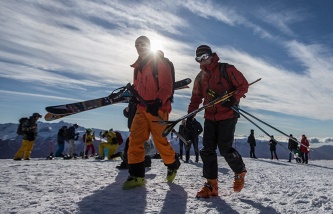 In Sochi on the coast fell the first snow, ski resorts are filled with tourists

As stated in the press service of the government, the meeting will discuss the situation in the domestic tourism market, issues of transport accessibility of resorts and tourist sites of Russia, and also import substitution in the sphere of tourism.

The event will be attended by Deputy Prime Minister Olga Golodets and presidential envoy in the southern Federal district Vladimir Ustinov, Minister for the North Caucasus Lev Kuznetsov, Minister of culture Vladimir Medinsky, the Minister of transport Maxim Sokolov, the head of the Federal tourism Agency Oleg Safonov, the head of Krasnodar Krai Veniamin Kondratiev, heads of relevant ministries of the Federation subjects, representatives of the tourism industry.

In a press-service of the government reminded that in the framework of the Federal target program “Development of domestic and inbound tourism in the Russian Federation” in 2011-2015, initiated the construction of more than 152 of the supporting infrastructure objects in 36 tourist clusters throughout 28 regions of Russia. With 45 objects already put into operation, the object 21 is being agreed by commissioning, and 86 more are under construction.

In addition, we continue to develop the Uniform Federal register of tour operators that will be available, including via the portal of state and municipal services. As of December 2015 this information resource registered more than 4 thousand tour operators. The number of domestic and international tour operators of inbound tourism compared with 2014 increased by 540 and is 3291 company.

Supported the development of new types of tourism: industrial (development of tourist routes with the administration of Nizhny Tagil, the leadership of Uralvagonzavod), polar (working group with representatives of the Russian geographical society, Association of polar explorers and the National tourist Union), event (support by the Federal Agency for tourism in 2015 various events in Yaroslavl, Murmansk, Tver, Sverdlovsk regions, Republics of Karelia, Tatarstan, the Crimea, etc.), military-Patriotic (all-Russian Patriotic program “Roads of Victory”, all-Russian historical and Patriotic action “memory Line”).

In 2015, the Russian tour operators, who previously worked only in the sphere of outbound tourism, reoriented, including, and for domestic flights, offering package tours. In particular, in 2015, formed and implemented more than 600 thousand of these tours, the price of which includes accommodation, meals, transfers. Relevant programs in the past year implemented in the Crimea, Sochi, Anapa, Mineralniye Vody. In the future we plan to extend this practice to other regions.

Time to rest in Russia

To implement the strategy of promotion of tourist potential of Russia abroad and within the country formed a national marketing centre “Visit Russiaa Time to rest in Russia”. Under the auspices of the center opened a network of national tourist offices “Visit Russia” in Finland, Germany, UAE, China and Italy, conducted on-site familiarization press trips for key tour operators and media.

In order to promote domestic tourism products launched in trial operation of the national tourism portal Russia.travel. The basis of the contents of the portal are the tourist sites of Russia, which are currently aggregated more than 12 thousand – are attractions, historic sites, monuments, cultural heritage, etc.

The site is integrated with the portal Culture.the Russian Federation and visitpetersburg.ru. In the near future will be held integration with www.feelrussia.com and a number of regional tourism portals. The site content will be translated into 8 languages.