Despite all the difficulties, investors know that in Russia you can still earn good money, the President said RATP in USA Sergei Millian. According to him, the current head of state at the end of the term is unlikely to change its policy. 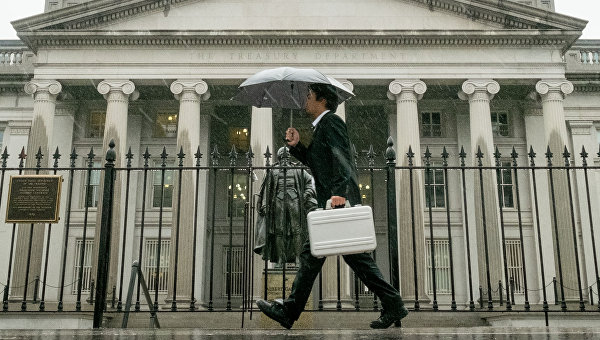 WASHINGTON, 6 Dec –, Dmitry Zlatarev. Economic cooperation between Moscow and Washington in 2016 will continue to experience a difficult period, but can improve after the US presidential election in November. This forecast in an interview given by the President of the Russian-American chamber of Commerce in the USA (RATP) Sergei Millian.

RATP is one of the largest non-governmental bilateral business associations. It includes two hundred companies, mainly American, who are working in the markets of the Russian Federation and the United States.

Russia is a lucrative market for investment

Freezing political contacts between the USA and Russia, undoubtedly, has an impact on economic cooperation. However, according to the Millian, “despite all the difficulties, some American investors are pretty much worked and well earned on the Russian securities”. According to him, even with the political events and sanctions “investors know that in Russia you can still earn good money.”

The expert suggests that “in 2016 Russia will be one of the most exciting markets for American business.” The reason he sees that “many assets are cheaper, companies will go out of business, resulting in lower prices can be very advantageous purchase”. “I think, given the availability of funds in the U.S. hedge funds, they will consider many countries for investment, and Russia is one of them,” says Millian.

The expert believes that the Russian direction of business will be to consider primarily those who have already worked on it and knows what it is, beginners are unlikely to learn about such options, because it is likely to deem them too risky. This contributes to a negative environment that is created for Russia in the American media. In addition, many experts have already complained that businessmen sometimes difficult to understand the sanctions regime and to understand, aren’t they violating them.

A Millian believes, that the “Americans would scrupulously respect the sanctions”. However, this does not mean the complete cessation of cooperation. First, many companies that had offices in Russia, in former times, are not going to abandon them now. “They are waiting to resume work in the Russian Federation in full, when politicians agree with each other. And in the meantime turn their attention to other countries”, — said the expert. In addition, he said, “because of the sanctions for the Americans closed out only certain areas, and there are many other areas where there are no restrictions and you can work quietly and to earn good money”. This is especially true of the exchanges, he said.

Sanctions undo until you have

General political situation dictates that emergency cancellation of sanctions should not wait. In any case, until the political winds blow in the direction of cooling. And business here will be forced “to play the second number” and wait for decisions at the highest level. “In the next six months, the sanctions will not cancel,” the Millian. As for the second half of the year, then, according to the expert, “everything will depend primarily on the situation in Ukraine and observance by Russia of the Minsk agreements”. The “secondary will be the role of the situation around Syria,” the expert believes.

Oil exports from the United States and the Russian “fuel needle”

One of the most resonant decisions taken in the US in the last days of 2015, was the lifting of the ban on oil exports, which operated for about 40 years. The first reaction of many experts was unequivocal: it will lead to a sharp weakening of the ruble. However, as it turned out, on closer examination of the issue in view of the obvious cons can be found and certain advantages for Russia, which in the long term can be very significant.

According to the head RATP, “much will depend on the appetites of China and on the ability of the world economy”. “If it will successfully develop and the demand for oil will grow, perhaps, a niche that appears the Americans will close. If the same happens slip, this will lead to lower oil prices and, consequently, to the fall of the ruble. How – while impossible to predict, it needs concrete facts, and we don’t know exactly how much oil the US will sell and who will buy,” he says.

Specialist and works with companies in various fields, including fuel, notes that “in General, it can accelerate the transition of the Russian economy from oil and gas to other sectors, in particular in the sphere of high technologies”. In his words, “so far Russia is so well earned on the export of hydrocarbon raw materials, its elites did not pay much attention to other areas just because so and all was well”. “Other areas would be in any case lower income. And now that the oil industry will bring less income, we will have no other choice but to invest in other sectors, for example in energy efficient technologies. Think, will also be a construction boom of prefabricated housing, everything connected with computer technologies. And you can also expect the development of cooperation with China and perhaps India,” says the head ramp.

TTP and the SCO will compete

One of the main economic outcome of 2015 is agreement on the TRANS-Pacific partnership (TPP), which President Barack Obama insisted for several years. Now all formalities are settled and the project became a reality. For Washington, this means the ability to create new jobs and open Asian markets for American companies. Other players, including Russia, will have to take into account new realities.

“Most likely, there will be some confrontation of TTP with the blocks, which are primarily Russia and China. First of all, it’s the Shanghai cooperation organization (SCO),” admits the Millian. In his words, “China understands that Russia cannot compete with America, and the United States realize that Russia without China would not be able to become a counterweight in the balance of power in the world.”

After the election, change is coming

According to the expert, it is most likely that the changes in Russian-American relations may occur after the US presidential election in November 2016. The current head of state at the end of the term is unlikely to change its policy, but his successor can make a difference. Moreover, as in the direction of improvement, and Vice versa.

A Millian believes that “the Democrats will be difficult for a third consecutive time to hold the White house”. As for Republicans, some of them relating to Russia – at least for now, in the midst of the election campaign – even worse than Obama. Other representatives of the party “look more positive,” he said. In particular, he said, “in recent years, encouraging comments Donald trump, who thanked the Russian President Vladimir Putin for the compliment in his address”.

Trump is positive, but will take into account the view of the lobby

The Millian for several months worked with trump through this exclusive contract, and according to him, knows the billionaire, his team and “right hand”. “I have a clear idea of how trump feels about Russia and Russians. I can assure you – very positive, friendly, kindly. On many of our meetings were attended by the Russians, and he was very polite and nice. His approach is purely a business”, — said the head ramp.

According to the Millian, when trump as President “in relations with Russia will be pure pragmatism, in contrast to the current times”. “If he feels that cooperation with Russia is profitable for the USA, he will develop and will restore all contacts, both political and economic. I think I will resume the work of the presidential Commission for cooperation,” he said.

At the same time, he said, “the complexity of American politics is the presence of different groups with influence at the White house”. In particular, “serious lobby has a powerful military-industrial complex, large corporations.” “Trump will be forced to take their views and find compromises,” — said the head ramp.