ST. PETERSBURG, January 6. /Corr. Roman Podervyansky/. The largest and most powerful in the world nuclear icebreaker “Arktika” launched in may. This was reported by the journalist. in a press-service “Baltic plant”. 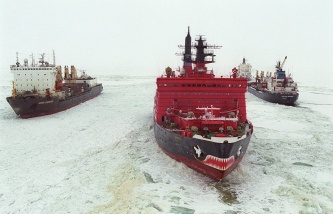 Rogozin: by 2020 Russia will have three nuclear icebreaker of new generation

Further the vessel will be finish for on the waterfront, and in December 2017 will give after all the tests the customer – FSUE “Atomflot”.

A new generation of icebreakers were designed “CDB “iceberg”. The lead ship of the project “Arktika” was founded in November 2013, the first serial icebreaker “Sibir” in may 2015. The tab of the second serial – “Ural” is scheduled in September 2016. Under the contract, the serial nuclear-powered value of 84.4 billion rubles is to be commissioned in late 2019 and 2020.

The newest Russian nuclear submarines will be able to overcome the nearly three-meter ice, and conduct vessels with carrying capacity up to 100 thousand tons. They will serve the Northern sea route and drive vessels transporting hydrocarbons from the Yamal deposits and giganskogo peninsulas, the Kara sea shelf to markets in the Atlantic and Pacific oceans.

The nuclear icebreakers of project 22220 bigger and more powerful than their predecessors. New design allows you to use the ship in Arctic waters and in estuaries of polar rivers. The maximum length will be to 173.3 m, width – 34 m, draft on design waterline – 10.5 m, minimum working draft – 8,55 m gross Tonnage 33,54 thousand tons. Icebreaker capacity of 60 MW.

Icebreakers type LK-60Я get durectory power plant. The main source of steam – installation of a new generation RITM-200 with capacity of 175 MW, specially designed for this vessel on behalf of OKBM Afrikantov. On “the Arctic” to be installed in 2016. The cost of a single RITM-200 plant – 8 billion rubles.

“Baltic plant” (part of “United shipbuilding Corporation”) has built all Soviet and Russian nuclear-powered icebreakers with the exception of the first in the world “Lenin”. In 2007 it completed construction of the atomic icebreaker “50 years of Victory”, which to date remains the largest icebreaker in the world with a length 159,6 m, with a displacement of 25 thousand tons and a capacity of 55 MW.

Just for almost 160 years, St. Petersburg the company issued approximately 600 warships, submarines and civilian vessels. The length of Russia’s largest pile “A” reaches 350 m. It allows to build and to launch vessels with deadweight up to 100 thousand tons. State enterprises – more than 4 thousand people.