MOSCOW, January 6. The suspension of two flights of Turkish airlines, Pegasus Airlines and Onur Air in Russia due solely to the fact that their leadership in a timely manner did not bother to get visas for their crews. This was stated by the official representative of the Russian foreign Ministry Maria Zakharova in connection with made by the Turkish authorities, accusing Russia of violating international aviation regulations. 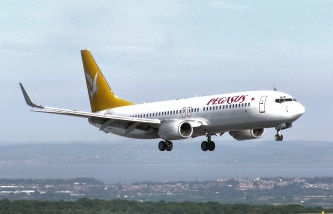 “With indignation have apprehended the announcement today by the Minister of transport of Turkey with groundless accusations of Russia in connection with the suspension of flights to our country two Turkish airlines, Pegasus Airlines and Onur Air. We would recommend a Turkish Minister are not included in hasty anti-Russian propaganda campaign and find out the real situation with the mentioned Turkish airlines”, – said in comments.

“Pegasus filed the visa request and the documents in our Consulate General in Istanbul only in the afternoon of 6 January. Onur Air on visas and have not applied. It is significant that Turkish Airlines, in time to address the issue, received in due course a multi-entry annual visas for 380 pilots and technicians and operates flights on schedule”, – stated in the message.

As noted Zakharova, the Russian foreign Ministry consider absolutely unacceptable the politicization of the topic and hope that other Turkish carriers will follow the example of Turkish Airlines.

January 5, Turkish airlines, Pegasus Airlines and Onur Air announced the suspension of flights in the Russian Federation till January 13 and January 14 respectively. “As our company failed to receive the approval of applications for visas for our employees, we are suspending flights to Russia up to January 13” – said in a statement, Pegasus Airlines.

Onur Air has suspended its flights to Nalchik until January 14 because of problems with visas. At the same time, Turkish Airlines said it will continue flights to Russia, because visas for members of her crew had been received in advance.

Today the Minister of transport, Maritime and communications of Turkey Binali Yildirim, Yildirim stated that it considers a violation of international aviation law that the crews of the Turkish airlines has not received the Russian visa.

“Practice, applied by Russia in respect of crews, contrary to the international rules of air travel. We have no purpose to respond to Russia in the conditions of crisis. But we noted diplomatically that believe such measures are wrong”, – quotes the words of the Minister, the newspaper Milliyet.