The UN, on 8 January. /Corr. Oleg Zelenin/. Russia regards all the talk of the Ukrainian authorities about the possible deployment in Donbas peacekeeping mission as an attempt to divert attention from failure by Kiev of a number of key provisions of the Minsk agreements. This was stated on Friday, TASS permanent representative of the Russian Federation to the UN Vitaly Churkin, commenting on the plans of the Ukrainian diplomats to arrange a trip of the members of the Security Council on the East of the country. 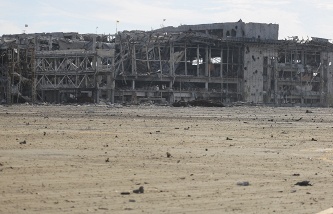 “Considering all the talk about the deployment to Eastern Ukraine of some UN peacekeeping missions as an attempt to divert attention from failure by Kiev of a number of key provisions of the Minsk agreements of February 12, 2015. Their international support, as it is known, is engaged in the OSCE, “on the ground” is its Special monitoring mission, which has all the necessary tools,” said the diplomat.

Previously permanent representative of Ukraine to the United Nations Volodymyr Yelchenko has taken the initiative to invite the permanent representatives of member countries of the security Council in the Donbas, to convince them of necessity of deployment of a peacekeeping mission in the region. According to him, he even started to discuss this issue with representatives of France and the United Kingdom. In the diplomatic missions of the two countries have so far refrained from commenting on this.

In the self-proclaimed Donetsk national Republic (DND) stated that they considered the initiative of Kyiv is contrary to the Minsk agreements. “I would like to remind you that there is a complex of measures on implementing the Minsk agreements signed on February 12, 2015. And according to paragraph 3 of this document, monitoring and verification entrusted to a Special monitoring mission of the OSCE. No representatives of UN and other peacekeeping organizations”, – said the head of the delegation of the DPR in the contact group Denis Putilin.

In his view, is “another attempt of the Ukrainian side of the audit of the Minsk agreements, which is unacceptable and totally not conducive to their implementation”. “We therefore remain opposed to such actions”, – concluded Pushilin.

Members of the UN security Council periodically carry out study tours to countries in crisis and going the way of post-conflict reconstruction. So, this month we discuss the possibility of a visit to Burundi.