SOCHI, January 11. The President of Russia Vladimir Putin is confident that Russia was to assert the national interest a quarter century ago. Lack of clear position on this issue is the mistake of Russian politics, he admitted. 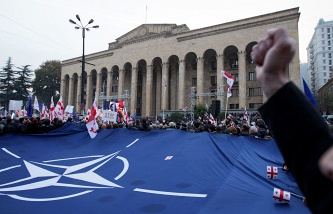 “We claimed their national interests, but they should have done it from the beginning. And then, maybe, the world would be more balanced,” – said the head of state in an interview with German newspaper Bild. According to Putin, Russia not clearly formulate its national interests, was a mistake.

The President recalled that “after the collapse of the Soviet Union have any such complex processes inside Russia itself – the decline in industrial production, the collapse of the social system, separatism, and especially obvious attack of international terrorism”.

“Of course, we ourselves are to blame, what can I say, there is nobody to blame,” admitted the Russian leader.

However, he is convinced: “the Fact that international terrorism was used in the fight against Russia, and no one either didn’t pay attention to it, or Vice versa supported anti-government forces in Russia have supported the political, informational, financial and sometimes military support provided, this is for us an obvious fact”. According to him, Russia realized that “talk the talk, and geopolitical interests is quite a different matter”.