In an interview with German newspaper Bild, the Russian President spoke about defending the national interests of Russia and the prospects of solving the crisis in Syria, the problems in relations with Turkey and when in Russia will begin the economic recovery. 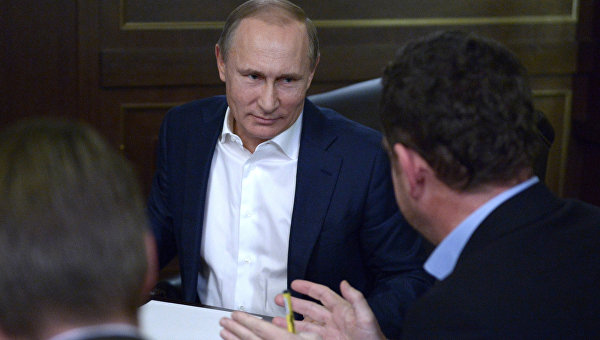 MOSCOW, 12 Jan. The President of Russia Vladimir Putin in interview to German newspaper Bild spoke about the cooperation with the West after the annexation of Crimea, defending the national interests of Russia and the prospects of solving the crisis in Syria. The President called Ankara’s actions in the incident with the Russian su-24 humiliating, and the assertion that Russia is fighting in Syria not ISIS, and the rebels, is lying.

The actions of Turkey, which, shooting down Russian su-24, made no attempt to explain to the Russian Federation, and rushed to seek protection in NATO, look weird and humiliating to Turkey, Putin said.

“The Turkish government instead of trying to explain to Russia that committed a war crime due to the fact that they shot down our military bomber striking blows against the terrorists, rushed to the headquarters of NATO to seek protection, it looks very weird and, in my opinion, Turkey’s humiliating,” — said Putin.

The Russian President emphasized that problems in Russian-Turkish relations have no connection with the membership of Turkey in NATO.

“NATO needs to protect its members from attacking them, but in Turkey nobody attacks. If Turkey has some interests somewhere in the world, in the nearest States and it means that NATO has to protect and provide for all these interests? This means that such a member of NATO, like Germany, should help Turkey to explore the nearby areas?” — Putin said.

The words of U.S. President Barack Obama about Russia as a regional power and attempts to talk about other countries in a derogatory manner are erroneous attitude and the desire to prove their uniqueness, Putin said.

“I think that the reasoning of the other countries, the attempt reasoning about other countries in a derogatory manner is the other side to prove their uniqueness. It seems to me that this is wrong,” said Putin in an interview with German newspaper Bild, responding to a question about Obama’s statement about Russia as a regional power.

“If to speak about Russia as a regional power, first you need to decide what kind of area it is. Need to look at the map and say: this is what a European part? Or the Eastern part, where our neighbors are Japan and the United States, if to keep in mind Alaska, and China? This is the Asian part? Or is it, say, southern? Or look to the North. In fact, in the North we border with Canada via the Arctic ocean. Or in the South? Where? What kind of area are we talking about?” — said Putin.

He also stressed that in no way interpreted the words of the American leader of Russia, because everyone is entitled to their own opinion.

“It is his opinion, just as I know his view that the American nation, the United States is exceptional. I don’t agree neither with the one nor the other”, — Putin said.

The Russian President called a lie the allegations that the Russian Armed forces in Syria are not fighting with the “Islamic state” (IG, the organization banned in Russia), and with the rebels. “They all lie. See, those videos that appear to support this thesis, appeared before our pilots began to strike blows to positions of terrorists. And this is the confirmation. But our critics are trying not to notice,” he said. He said that Russia coordinates its actions in Syria and the army of President Bashar al-Assad and the armed opposition groups fighting ISIS.

Answering the question about the possibility of granting asylum to Syrian President Bashar al-Assad in Russia, Putin said that “it’s premature to discuss”.

“We Mr. Snowden granted asylum, it was more difficult than to give to Assad. First need to enable the Syrian people to speak out. And I assure you, if it goes in a democratic way, in this way, it may be, and you will not need Assad to go anywhere. And whether he’s President or not,” said Putin.

The President also appreciated the development of the situation in Syria and said that the necessary constitutional reform and elections, and the Syrian people should determine who and how will govern.

“I think we need to move towards constitutional reform. This is a complicated process, of course. And then on the basis of the new Constitution to hold early elections of the President and of the Parliament”, — said the Russian President.

Putin also expressed the view that the differences between Saudi Arabia and Iran in General complicate efforts to address the Syrian problem, the fight against terrorism and to halt the flow of refugees to Europe.

“Love can be happy, if it is mutual”

Russia is ready to work with all Western partners in the presence of the subject for joint discussion, said the Russian President.

“We are ready to work with everyone, if there is a subject for joint discussion. We believe that he is, but love can be happy, if it is mutual. If we don’t want to work, then not necessary”, — Putin said, answering the question about prospects of renewal of cooperation of Russia with the West through NATO.

Answering the question about cooperation between Russia and the West after the annexation of Crimea, Vladimir Putin said that Russia is ready to compromise with Europe on the basis of international law.

“You asked me your humble servant ‒ friend or not friend? Relations between States are built a little differently, not as relations between people. I am not a friend, not the bride and not the groom, I’m the President of the Russian Federation. 146 million people – these people have their interests, and I am obliged to defend them. We are ready to do not confrontation, we are ready to compromise, but, of course, on the basis of international law, uniformly all understand”, — said Putin.

The President called anti-Russian sanctions of the West are stupid and harmful decision, but acknowledged that it’s not the biggest problem for the Russian economy.

“For us, what are the limitations? It’s not the most complex thing we experience, but also harmful to our economy, access to foreign financial markets”, — said Putin.

The fate of 2.5 million people

The annexation of Crimea to Russia — this is not a change of borders, and the fate of 2.5 million people who were frightened and disturbed by the coup d’état in Ukraine, said the President.

“Question: what is democracy? Democracy is the will of the people, people wanted to live the way they voted. For me important is not the territory and the boundaries and destinies of people”, — Putin said.

The President stressed that during the organization and holding of the referendum on the Peninsula not a single person has died, but the Armed forces were involved.

Putin admitted that, as before, respects the German Chancellor Angela Merkel, and called it sincere and professional person.

“I’m sure she’s a very sincere man. She has a certain framework in which it should work, but it is sincere, and I have no doubt, seek to find solutions for the settlement, including the situation in the South-East of Ukraine”, — said Putin.

German journalists remembered the story of 2007, when in a room where took place the meeting between Putin and Merkel in Sochi, went favorite dog of the Russian President Labrador Horses and frightened Merkel. Some foreign media wrote that Putin did it on purpose, because he knew that the German Chancellor is afraid of dogs after she was bitten by a dog in 1995.

“No, of course. I didn’t know about it. I, on the contrary, she wanted to do something nice when I showed her my dog. I then explained to her and apologized for it,” — said Putin.

In addition, Putin said that relations between Russia and Germany could not spoil, despite the attempts that were made through the media and anti-Russian propaganda.

The Russian President also denied the suggestion of the journalists of the German edition of Bild that his current views on world politics are very different from those which he followed in early 2000s when he opposed confrontation in Europe.

“I never changed. First, I feel young today. I was a friend (Gerhard) Schroeder, and I remain friends with Schroeder. Nothing has changed,” said Russian President. He stressed that for many years has not changed and his attitude to many problems, in particular to combat terrorism.

The Problems Of Europe

Russian President said that after the fall of the Berlin wall was not overcome the division of Europe, and the error of Russia that she claimed their national interests.

“We did everything wrong from the first steps, we overcame the division of Europe. 25 years ago the Berlin wall fell, but the division of Europe was overcome, the invisible walls were just moved to the East. This has created preconditions for future recriminations, misunderstandings and crises”, — said Putin.

The Russian President recalled that after the fall of the Berlin wall, some German politicians have said that NATO would not expand eastward.

The President also believes that the crisis in Europe would not have been so acute, if NATO did not seek to “reign” and expand. Putin believes that the leading members of NATO could abandon the expansion of its organization on the basis of universal international security, however, after the collapse of the USSR “there was a desire to get the full pleasure from his sole stay on top of world glory”.

The President acknowledged that he considered a mistake that Russia for 25 years, claimed their national interests.

“Yes, admitted. We claimed their national interests, but they should have done it from the beginning. And then, maybe, the world would be more balanced,” said Putin.

The President said States must join efforts in the fight against terrorism, crime and other common problems, and if Russia’s position on some issues is different, you need to look for a common solution.

“Our position is if someone does not like, it is not the best method every time you declare us enemies. It may be better to listen sometimes, to critically rethink, what to agree and look for common solutions? That’s exactly what I said in new York on the 70th anniversary of the founding of the UN,” said Putin.

The economy will be on the rise

Putin promised that the Russian economy will gradually stabilize and remain on the rise. He noted that the authorities of the Russian Federation has adopted a set of programmes, including for import substitution.

Putin believes that the non-oil budget deficit in Russia increased to a very dangerous line, the authorities are forced to reduce costs, but this leads to a healthier economy overall.

“When oil prices are high, it is very difficult to refrain from use of oil revenues to current expenditure. And the oil and gas deficit has grown, in my opinion, to a very dangerous line. Now we are forced to downgrade, and it heals,” said Putin in an interview with Bild.

The President also promised that Russia will continue to develop our democratic institutions so that people felt that the government responds to their demands.

“I guess we have a lot more problems so that people feel that they have an actual influence on the government, and government responds to their demands. We will work to improve our tools”, said Putin.