MOSCOW, January 13. Experts do not rule out further serious fall in the production of chocolate in Russia and even stop production in case of further ruble devaluation and the worsening of the crisis tendencies on the market. This is stated in the message of the research center of the confectionary market (of ZIKR).

Ruble prices for basic raw materials for chocolate production in 2015 grew dramatically, cocoa beans, cocoa paste and cocoa butter for the year rose by 40-80%, which led to higher prices for finished products and a significant drop in demand.

“Average consumer prices for chocolate in Russia in November 2015 rose by 37.8% (up to 741,36 RUR/kg) compared with prices in November 2014. Chocolate consumption during the year decreased by 8.4% to 3,99 kg per year per person. The costs of production of chocolate products during the same period grew in the range of 50-100%,” – said in ZIKR. 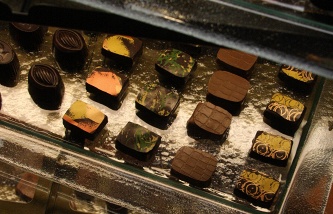 Experts: in Russia decreased the consumption of chocolate because of rising prices and falling incomes

Even the seasonal peak demand for confectionery products at the end of the year may not meet the expectations of producers, as consumers shift to cheaper products. As evidence in the center give statistics of the Federal customs service (FCS): on the eve of new year holidays the import of chocolate products (mainly relate to premium price segments) in October 2015 dropped by 52.7% compared to the previous year and amounted to 43 thousand tons.

In addition, significantly decreases the production of some domestic products. Thus, the production of chocolate and food products, containing cocoa (except sweetened cocoa powder), Packed in January-October 2015, down 16.9% to 87,03 kt, reminded the experts.

“When aggravation of crisis phenomena and one should expect a sharper decrease in the consumption of chocolate products, especially in the regions. And further devaluation of the ruble will make the production of high-quality chocolate unprofitable. When you save the current state of Affairs in the first quarter of 2016, risks a more severe reduction of production of chocolate products, up to the stop of a number of industries,” warns Executive Director of the Centre for research confectionery market Elizaveta Nikitina, words which are contained in the message.