SIMFEROPOL, January 13. Ex-Minister of industrial policy of Crimea Andrey Skrynnik may be involved in the fraud with the use of public markets in the territory of the Republic. This was stated by the head of the Republic Sergey Aksenov at the meeting of the State Council of the Crimea. 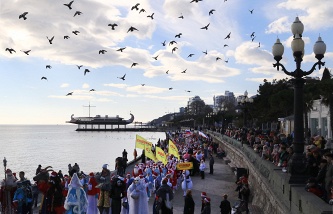 The results of the year in the Crimea: the dismissal of five Ministers, a gap ties with Ukraine and “Svetach”

“The money received from use of state property in the Treasury were reported. I went to the Prosecutor’s office to investigate the criminal activity of officials of Executive power. The first is the Minister of industrial policy Mr. Skrynnik. On what basis, Mr. Minister, through inaction have allowed the management of crooks in leadership positions markets?” – said Aksenov.

“According to unofficial projections, illegal Fund-raising has reached a million dollars a month. Bribed officials not only Executive authorities, and partly of the law enforcement system”, – said the head of the Republic.

Aksenov sent Skrynnik resigned on December 29. Then the head of Crimea noted that it is not associated with problems in the implementation of Federal target programs (FTP) of development of the Crimea and Sevastopol.

The office of industrial policy Minister Skrynnik has held since July 2014. At the end of June 2014, he was involved in the case of fraud with the property of the Bakhchsarai DISTRICT. Later posts of any claims to the Minister by law enforcement agencies didn’t arrive. The resignation of Skrynnik Aksenov took after his statement about his intention to leave his post.