The forum is held since 2010 in memory of the outstanding scientist-the economist, the ideologist of the Russian reforms of the early 1990s, Yegor Gaidar. During this time the Forum has become a Central political and economic event in the life of the country. 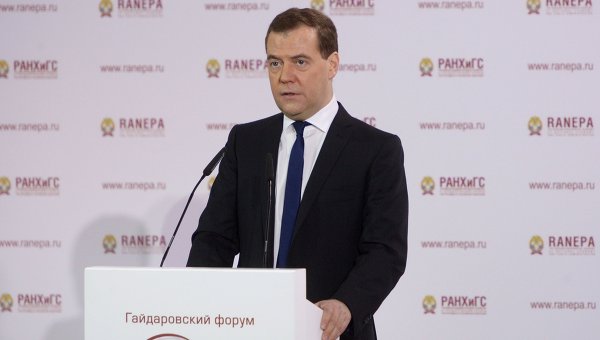 MOSCOW, 13 Jan. Politicians, economists, representatives of authorities and business, foreign experts will discuss the development of Russia’s economy in the current unprecedented difficult conditions in the annual Gaidar forum, which this year is held under the motto “Russia and the world: a look into the future”.

Economic forum will be the first major international event in 2016. On Wednesday in plenary discussions of the forum will be attended by Prime Minister Dmitry Medvedev.

The forum will take place against the background of falling world prices for oil in 30 dollars for barrel. After oil, the Russian currency in January, beating the record: on Tuesday, the dollar jumped above 77 rubles, having updated a maximum since December 2014.

At the moment Russia is conducting internal and external economic policy on the background of Western economic sanctions, limited access to external capital markets, the significant weakening of the ruble and historically low world prices for oil – its main export commodity. Oil and gas revenues account for just under half of all Federal revenues. In particular, in 2016 their share is expected at 44%.

In addition to the premiere on different days of the Gaidar forum will take part the Minister of economic development Alexei Ulyukayev, Finance Minister Anton Siluanov, the Deputy head of the Central Bank Ksenia Yudaeva, head of energy Alexander Novak, Minister of industry and trade Denis Manturov, Minister of transport Maxim Sokolov, the former Minister of Finance Alexey Kudrin. Among the foreign participants — Professor at Peking University, Director of the China center for economic research Justin Yifu Lin, Director of the fiscal Affairs Department of the IMF Vitor Gaspar, Chairman of the Board of Directors of UBS Group AG Axel Weber, the head of the IMF mission in Russia, Ernesto Ramirez Rigo and others.

The Gaidar forum has been held since 2010 in memory of the outstanding scientist-the economist, the ideologist of the Russian reforms of the early 1990s, Yegor Gaidar. During this time the Forum has become a Central political and economic event in the life of the country.