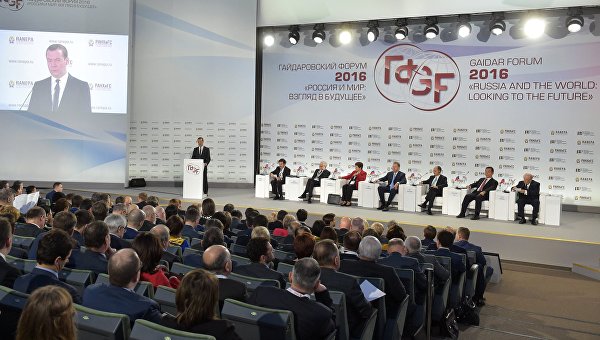 “Still, the Russian economy showed that market mechanisms are fairly stable. Even when our Western partners to act against her non-political methods, rigid structures that are characteristic of the unfree economic systems, such tests would not cope,” — said Medvedev, speaking at the Gaidar forum.

He stressed that the Russian economy can withstand his absence, the inflow of oil and gas rents.

“An important testimony was, albeit small, shift in the structure of Federal budget in the prevalence of income not directly associated with the oil and gas sector. In the past year gradually increased the non-oil export in physical and value terms,” — said Medvedev.

According to him, to support this non-commodity exports, it is necessary to fully unleash the integration potential of the Eurasian economic Union, to negotiate free trade areas with the leading foreign trade players.

“I stress that the work in this direction we will build on the basis of universal WTO rules and, of course, will not to create closed clubs with their own rules of the game which do not take into account the interests of other participants in the global economy and trade,” he said.