KIEV, January 13. Ukraine this week will launch a pilot trains to simulate the route of export of Ukrainian goods to bypass the territory of the Russian Federation. This was stated by Prime Minister of Ukraine Arseniy Yatsenyuk during the government meeting.

“This week will launch a pilot trains to Ukraine – Georgia – Azerbaijan – Kazakhstan, which will find an alternative way of supply of Ukrainian goods to the countries of Asia, where they were always present”, – he said. 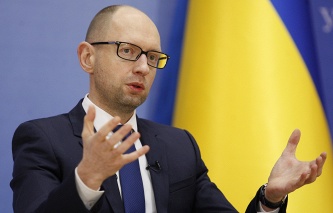 Yatsenyuk instructed to expand the list of goods from the Russian Federation, which fall under the Ukrainian sanctions

“On Friday we are launching this train from Ilyichevsk. Hopefully, this will allow Ukrainian economy to find an alternative way of supplying goods to foreign markets, – said Yatsenyuk. – A new transit route will open up opportunities for business.”

He noted that “the goal is to have one rate (with partners – approx.TASS) and load the train.” Yatsenyuk said that this issue is being discussed these days in Baku.

Ukraine has been actively promoting the idea of using the territory for transportation of goods from Asia to Europe in the framework of the project “Economic zone of silk road”. At the beginning of December 2015, Vice Prime Minister of Ukraine, Minister of regional development Gennady Zubko at the meeting with first Deputy Prime Minister of Azerbaijan Yagub Eyyubov was my initiative to discuss the railway administrations of China, Azerbaijan, Georgia and Kazakhstan the issues on the establishment of a single tariff for transit container transportation and launching “of the first trial train on an agreed route in the direction of the Caspian sea and the Great silk road”.

The issue of development of transport infrastructure for the transport of goods from Asia to Europe via Kazakhstan and Ukraine in the framework of the initiative “Economic zone silk road” on the route of Western China – Western Europe the President of Ukraine Petro Poroshenko raised at the meeting with Prime Minister Karim Massimov during his official visit to Kazakhstan in October 2015.

Plans to use Ukraine as part of the new “Great silk road” was also made Governor of Odessa region Mikhail Saakashvili, has proposed to redirect the flow of goods going from China to Europe through the Ukrainian port of Ilyichevsk. “Logistics is really a 30 days through Russia, through Ilyichevsk takes a maximum of nine days,” claimed then Governor of Odessa.

“Economic zone of silk road” (a New “silk road”) – the project of creation of transport, energy and trade corridor between Central Asia, South Asia and Europe. The project idea was put forward by Chinese President XI Jinping during his visit to Kazakhstan in September 2013.

The name of the project refers to the trading caravan routes of the middle ages, located on the territory of modern Kirghizia, Kazakhstan, Mongolia, India, Turkey, Iran and Greece. These routes were later named the Great silk road.

Currently the exact route that will be a new “silk road”, is not fully developed.