MOSCOW, January 14. The economic situation today has nothing to do with 1998. About this informed the head of the accounting chamber Tatyana Golikova during the Gaidar forum, organized by the Ranepa and the Gaidar Institute.

“We are in a fundamentally different economic situation, which has nothing to do with 1998”, she said.

As previously reported, Finance Minister Anton Siluanov did not rule out a repetition of the crisis of 1998-1999, unless measures will be taken to adapt the budget to the new conditions of the Russian economy.

As noted in his speech at the forum, Prime Minister Dmitry Medvedev, in Russia now are not nearly there was in the economy in 1998.

He believes that Russia has no right to yield to the sentiment of economic decadence and balance the level of growth was “plus minus zero”.

“The problem is that stopping the drop in GDP does not mean an automatic transition to growth,” he said. “Today we can’t afford to be stuck at the level of “plus or minus zero”, to yield to the sentiment of economic decadence,” says the Prime Minister. According to him, such a setup would have opened the way to prolonged recession,” Medvedev said in his speech.

On the adjustment budget 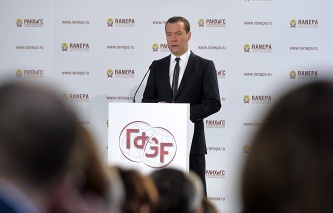 According to her, the reduction of expenditure budget 2016 should depend on the results of the analysis of efficiency of budget expenditures in 2015. “We need to pay close attention to what is happening inside the budget, how it was executed for the year 2015. And then, perhaps, we desire to globally reduce or sequestration will be somewhat different,” she said.

Earlier the Prime Minister Dmitry Medvedev warned the forum that if oil prices continue to fall, will require a revision of the budget.

“It is to be understood, need to prepare for the worst-case scenario, as is done in other countries”, – said the head of the Cabinet of Ministers.

The Ministry of Finance, in turn, expressed confidence: the ministries and agencies for 10% spending cuts in 2016, which will bring budget savings of more than 500 billion rubles.

According to Siluanov, the ten percent cost reduction can not be called a sequestration. “The sequester is happening when cutting the budget: you have to cancel a contract, violate Treaty obligations”. We brought the same limits, now the Agency, not signing contracts, choose the most important expenses and will provide us with a return proposals,” the Minister explained.

Estimates of the former Minister of Finance Alexei Kudrin, reduction of budget expenditures by 10% – an optimistic forecast in the current situation.