NOVO-Ogaryovo, January 14. The President of Russia Vladimir Putin noted the increased influence of the Shanghai cooperation organization (SCO) and assured that Moscow will continue to pay the closest attention to cooperation in the SCO. 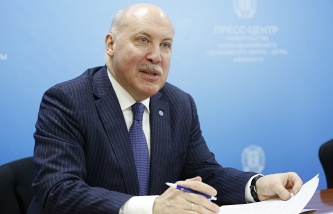 “We pay great importance to developing relations with our partners in the SCO,” Putin said at a meeting with Dmitry Mezentsev, who until January 2016 served as the General Secretary of the SCO.

“The Shanghai cooperation organization was born at the time to solve a fairly narrow tasks, not of a global nature is a solution to the border issues between the countries – founders, and now, of course, she has acquired a completely different weight and a different sound,” – said the Russian leader.

According to him, the SCO “to the fore not only the issues of security in the region – we also do not forget, – but also questions of economic cooperation, at the direction of, which in recent years is growing very rapidly”.

“We therefore, as agreed with partners, will strive to achieve all the goals agreed with the countries-participants of the Organization”, – said Putin.

The President also thanked Mezentseva for the work done. “Hope very much that the Executive bodies of the Organization will also work effectively as it was under Your leadership,” he said to Mezentsev. The head of state promised: “Your experience will be used in this and other directions”.

Assessment Mezentsev, under the Russian presidency in the SCO in 2015, could “provide a new level of interaction between the parties is strengthened interaction between the founding countries, observer countries and dialogue partners”. He stressed that the past in the summer of 2015 in Ufa SCO summit “had historical significance”, as was adopted the development strategy until 2025, as well as decisions on the expansion of the SCO. “We have begun the accession of India and Pakistan to the Organization, raising the status of Belarus, the arrival of new States in the Shanghai seven – Armenia, Azerbaijan, Cambodia, Nepal” listed Mezentsev.

He stressed that “this application for positioning the Organization in the region in a new capacity and the application to participate in international Affairs”. Former Secretary-General of the SCO also stated that the Organization began to actively develop trade and economic cooperation, which also begin to engage observer countries and partner countries. Mezentsev added that “becomes real and a regional component of the SCO”, when cooperation establish regions of States. He also sees great prospects of cooperation of the SCO with the UN, the CIS, ODKB, ASEAN and other structures.