MOSCOW, January 14. Former chief editor of GQ and head of the magazine “Snob” Nikolay Uskov will become the new chief editor of the Russian version of Forbes magazine. This is stated in the press release, the media group ACMG. 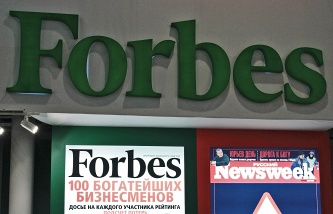 The new CEO of the publishing house, which produces Forbes, was Natalia Gandurina

In this position, he will be replaced by Elmar Murtazayev, who held the post from January 2014. Mazurin will continue to oversee the content of the magazine and website.

In addition, the publishing house introduced the position of chief editor of the United editorial office of the website and magazine, is the editor of the main ratings Forbes Nikolay Mazurin, the report says ACMG.

“For me the incredible honour to lead the Russian version of one of the most celebrated journals in the world. The priority will be the preservation of the independent editorial policy and development of digital-direction. I’m happy to start work, especially because the economy is becoming one of the hottest topics of our time”, – quoted Uskova on the website Forbes.

Business publication Forbes Russia produced since 2004. The Forbes magazine circulation is 100,000 copies. In Russia also published a quarterly Forbes Life and Forbes Woman. During the year, Forbes publishes 13 major business ratings, the most famous of which was “200 richest businessmen of Russia”. In October 2015 the publishing house Axel Springer Russia, which publishes Forbes magazine, was purchased by publishing group ACMG.