MOSCOW, January 14. The Ministry of economic development there are no documents about the resignation of Deputy Minister – head of Rosimushchestvo Olga Dergunova, said the official representative of the Ministry. 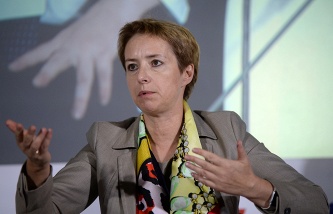 The head of Rosimushchestvo Olga Dergunova February 1, leaving the government

Previously, the newspaper “Kommersant” with reference to two independent high-ranking sources in the Russian government reported that Dergunova February 1, leaves the government.

The reason for the resignation – possible support regions and ministries that prevented the privatization of medium-sized state companies, including “daughters” ALROSA “JSC Diamond world”.

“No documents on this issue”, – reported in the Ministry.

The Federal Agency for state property management (Rosimushchestvo) was established in 2008, the main functions of the Agency include the management of state assets and the selling privatized Federal property. The volume of transactions under the “small privatization” in 2015 amounted to about 7.2 billion. “Large privatization” should begin in 2016, the income from it, by calculations of the Ministry of Finance, may amount to about 1 trillion roubles for two years.

Olga Dergunova became head of the Federal property management Agency in 2012 by going for civil service positions in VTB group.

Olga Konstantinovna Dergunova was born 15 may 1965 in Moscow.

In 1987 he graduated from the faculty of Cybernetics of the Russian economic Academy of national economy named after G. V. Plekhanov, in 1991 – postgraduate study of the Academy in the specialty “computers and programming”.

29 June 2012 Deputy Minister of economic development of the Russian Federation – the head of Federal Agency for state property management (Rosimushchestvo).

Named “Man of the decade” in the category “Technology” annual Internet promotions Rambler in 2007. In the ranking of the “100 most influential women of Russia” of the journal Light, published in March 2014, took ninth place.