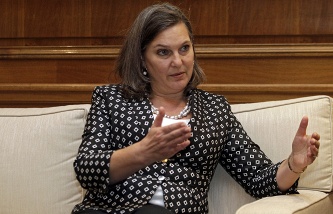 “The consultation ended. They were held in a closed regime,” he said. The negotiations lasted for more than 4 hours. After “Nuland went to the border area with Lithuania, she will leave the territory of the Russian Federation,” said Mamontov.

The meeting discussed the course of implementation of the Minsk agreements to resolve the conflict in Ukraine. This was stated by the head of the press service of the state Department of the USA John Kirby.

According to him, the meeting between Surkov and Nuland was organized “in development” of the negotiations that took place with the President of Russia Vladimir Putin and foreign Minister Sergei Lavrov with U.S. Secretary of state John Kerry in the framework of the latter’s visit to Moscow on 15 December last year. Nuland and Surkov met “to discuss the situation in Eastern Ukraine and the need for full implementation of the Minsk agreement,” said Kirby.

Nuland arrived in Kaliningrad from Lithuania. Surkov arrived in the area on January 14.