During the forum were voiced sometimes not the most optimistic forecasts about the Russian economy. One of the main topics was the announcement by the Russian authorities ‘ plans to streamline the budget by reducing its spending by 10%. 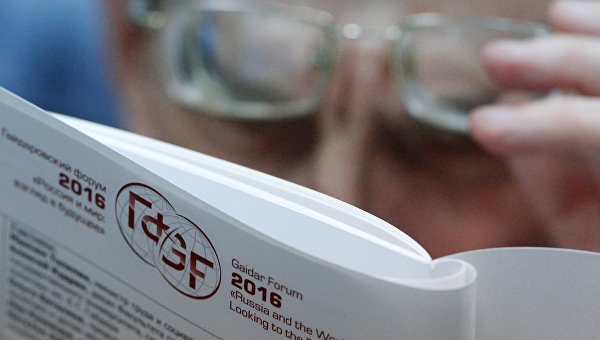 MOSCOW, 15 Jan. The first major economic event in 2016 — the annual Gaidar forum at Ranepa was held in Moscow, for three days, he became the main platform for controversial discussion and debate in which participated representatives of the Russian government and experts.

One of the main themes of the forum was a public announcement by the Russian authorities plan to streamline the budget by reducing its spending by 10%. Experts and politicians also voiced its sometimes not the most optimistic forecasts about the Russian economy associated with high inflation expectations, the Bank of Russia has announced that they will maintain tight fiscal policy.

RIA Novosti has identified five of the most poignant statements made on the forum and caused a wide public resonance and discussion.

Siluanov warned about the Ghost 1998

The economic crisis of 1998 became one of the biggest in modern Russian history — for example, inflation that year reached 84.5 percent.

“We lost the competition, we have to be honest. And a technological enslavement, I would say, we just happen to be among the countries that lose and countries of downshifters. Countries and people that have managed to adapt in time and to invest in it, they are the winners today. Countries that do not have time to adapt our own economy and the whole social system, and all institutions, they will be very hard to lose. And the gap will, unfortunately, significantly more than during the last industrial revolution”, — said the head of Sberbank and former economic development Minister German Gref, speaking on the last day of the forum discussion titled “the Future is impossible.”

“The first consequence is the fourth revolution is a huge income gap between people who have managed to adapt to the new situation and people who have failed to adapt to the new situation. The worst of our exports, and our largest export, which must be stopped, is “export of brains”. We do not believe, how much we export in a year, but this, I fear, the volume loss of the largest amount of what we export. Export permanently, unfortunately”, — said Gref.

Downshifting is a term denoting philosophy of life “life for me”, “abandoning the goals of someone else”. It is believed that claiming to be the downshifters tend to abandon their desire to promote common goods.

“Increasing the retirement age is now positive for the market and for the balance of the budget system, and even has political dividends in terms of supporting pensioners. Today, we, this year, will neoendemism pensioners — well how could it be worse? What is fear? Raising the retirement age will allow to index pensions to retirees in the following years to a greater extent, i.e. it is in the interests of pensioners,” — said on Wednesday former Minister of Finance, the head of Committee of civil initiatives (THD) Alexei Kudrin.

“The country 2030 (the year — ed.) is a country where, we assume, comfortable… This is a country where no one pays one penny of tax without receiving from the state service of appropriate quantity and quality for his services. Finally, I think, is a country in which nobody will be interested in the question of how much oil is worth today and what today the dollar against the ruble”, — told about his expectations of the Minister of economic development Alexei Ulyukayev.

In February the Ministry is to present the first version of the Strategy for socio-economic development of the country until 2030.

“I’m here for the position of UIA (Vladimir, rector of the Ranepa — ed.) and refer to the position of many other international experts. Perhaps we (the government — ed.), acting like normal people in real conditions make mistakes. But we say that analyzing our activity for the whole of 2015, the government has not committed any big mistakes,” — said the first Deputy Prime Minister Igor Shuvalov, closing panel discussion with the participation of Prime Minister Dmitry Medvedev.

In 2015, Russia’s GDP went into deep recession amid the devaluation of the ruble and low oil prices, sovereign credit rating of Russia was attributed to speculative grade, the budget deficit increased sharply, and the “hole” in it had to be waterproofed with the freeze of pension savings and income from exchange rate difference, obtained oil and gas companies.