The Cabinet proposes to create a unified system of administration of taxes and similar taxes payments within the system of the Ministry of Finance so that in this system preserved the Federal tax service, which is responsible for the overall methodological guidance. 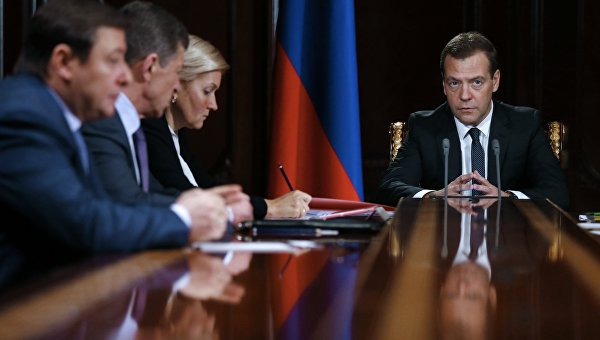 NOVO-Ogaryovo, 15 Jan. Prime Minister Dmitry Medvedev at a meeting with President Vladimir Putin reported about the prepared draft decree according to which for a single mechanism of administration of taxes, customs duties and insurance contributions to state extra-budgetary funds will meet the Federal tax service. The system will include the payments collected and the FCS of the Russian alcohol regulation Department and insurance contributions to social funds, including the FIU.

Order to establish a uniform mechanism of administration of taxes, customs duties and insurance contributions to state extra-budgetary funds was given by the head of state to the government in December as part of his address to Parliament.

“The government has worked for the Commission arising from the message of the President, and proposes to improve the administration of tax payments as follows. Given the fact that in General for all this activity is the responsibility of the Ministry of Finance proposed to establish a unified system of tax administration and Nontax, i.e. equal to the taxes, payments within the system of the Ministry of Finance so that in this system preserved the Federal tax service, which is responsible for the overall guidance, administration,” — said Medvedev.

“Also immersed in this system of the Federal customs service, which collects customs duties, and, accordingly, to transfer it almost on the same methodological rails that are running at the moment, the Federal tax service. And translate in the same system Rosalkogolregulirovanie”, — continued the Prime Minister.

Putin asked about fees in the pension system.

“It is also envisaged in the draft decree, which we are submitting for your consideration. It is envisaged that pension payments, payments under social funds could be transferred also into the system for the administration of these payments led the Federal tax service and took to them the same methods of administration that apply to other taxes. Thus, there will be a common core administration fees and, accordingly, future use of all tax and non-tax payments in the country,” Medvedev said.