MOSCOW, January 15. Net profit of the company Sakhalin Energy (the project operator “Sakhalin-2”) increased in January-September of 2015 compared to the same period last year by 10% and amounted to $ 96,282 billion. This is stated in the report of Gazprom under international financial reporting standards (IFRS) for 9 months of 2015. 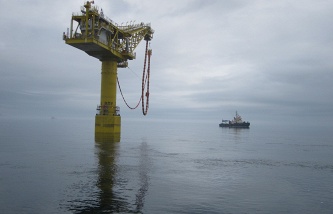 Media: the program the third phase of the Sakhalin-2 project will prepare the Japanese Chiyoda Corp.

Sakhalin Energy’s revenues for the reporting period amounted to 288,519 billion, an increase of 30,78% compared to the same period last year.

Sakhalin Energy is the project operator “Sakhalin-2” – the only Russian project on LNG production. In the framework of the project “Sakhalin-2” developed Piltun-Astokhskoye and Lunskoye fields of the Sakhalin shelf, with recoverable reserves are estimated at 150 million tons of oil and 500 billion cubic meters of gas. The shareholders of Sakhalin Energy are Gazprom (50%), Royal Dutch Shell (27,5%), Japanese Mitsui (12,5%) and Mitsubishi (10%).