The numbers Pavlopoulos, who took office in March 2015, Russia is attending for the first time. The visit, according to Greek media, has the purpose of further improving relations between the two countries. 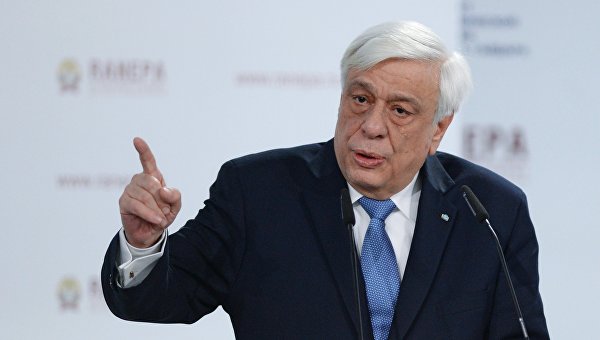 MOSCOW, 15 Jan. The President of Russia Vladimir Putin will hold talks with Greek President Prokopis Pavlopoulos, during which it is planned to discuss the state and prospects of bilateral relations and current international issues.

Pavlopoulos first visit to Russia. In the position of the head of state he assumed in March of 2015. This will be his first meeting with Putin.

The Greek President arrived in Moscow the day before, he took part in the Gaidar forum “Russia and the world: a look into the future”.

Greek media attach great importance to the visit, noting that it has the purpose of further improving relations between the two countries and is also involved in 2016 cross-years of Russia and Greece.

In the framework of the cross year it is planned to hold many events, including major exhibitions in the capitals and famous touring theatre companies. But the Year will be devoted not only culture and art. He is expected to give impetus to bilateral relations and cooperation in almost all spheres, will help to find new schemes for investment cooperation, to stimulate trade and increase in tourist flows. Russia will be the guest of honor at the International exhibition in Thessaloniki, which takes place in September. In addition, in 2016 celebrated the Millennium of the Russian presence on mount Athos. All these issues can be addressed at a meeting between Putin and Pavlopoulos.

Experts do not exclude that the President of Greece will inform Putin about the situation in the economy, as well as on the situation of refugees and migrants — the main stream in Europe comes from Turkey via Greece.

During the visit of Pavlopoulos, according to senior researcher of the Institute of Slavic studies Russian Academy of Sciences Petr Iskenderov, can be signed the agreement about participation of Moscow in Greek investment projects and granting of loans to Athens. The expert also believes that the parties can discuss the situation with the sanctions war between the EU and Russia.

“In my opinion, Russia will try to get information about what is the balance of power in the European Union from the point of view of the prospects for the lifting of sanctions,” he said.

In Greece believe the prospects for economic cooperation are highly optimistic, despite the problems that exist at the international level and impeding their development: the EU sanctions against Russia and retaliatory measures of the Russian Federation, connected with the embargo on agricultural products from EU countries.

According to Iskenderova, on the negotiations it may come and energy projects. He noted that there had been a certain shift in the Bulgarian position regarding the renewal of the project “South stream” and against the oil pipeline project Burgas-Alexandroupolis.

“In my opinion, the current situation opens some prospects for intensifying cooperation between Russia and Greece in the energy sector, including more active participation of Russian companies in tenders in the energy market of Greece”, — said the expert.

In Greece the President is elected by Parliament and is endowed with a number of powers, however, the direct management of the country is the Prime Minister. According to the Greek Constitution, the President is the arbiter of government institutions and mainly performs representative functions. However, Pavlopoulos has a very active political activity, particularly in the international arena.