MOSCOW, January 15. In Moscow strongly condemned the attack grouping “Al-Shabab” on the base of the military contingent of the African Union Mission in Somalia (AMISOM). This is stated in comments published on the website of the Russian foreign Ministry. 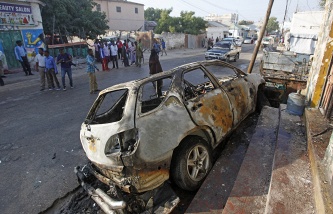 Media: 50 Kenyan soldiers killed in militant attack at military base in Somalia

“According to the information received, on 15 January, the militants of the radical group Al-Shabaab attacked a base of the military contingent of the peacekeeping Mission of the African Union in Somalia in the South, said in depodesta. – Reported the death of at least 50 Kenyan troops from the AMISOM”.

“We strongly condemn this terrorist attack, stresses the commentary. – Support the efforts of the Federal government of Somalia to rebuild the state and achieve national reconciliation. Russia as a permanent member of the UN security Council will continue to provide necessary assistance to the promotion of Somali-owned internal settlement”.

In depodesta also expressed deep condolences to the families of the victims.