YEREVAN, January 16. /Corr. Tigran Liloyan/. Armenia turned to Russia with a request to reduce the tariffs for delivered natural gas. This was announced by Prime Minister Hovik Abrahamyan met with a group of local entrepreneurs that produce and export household goods and food.

For the sake of preserving jobs

“Domestic producers have expressed concern about the negative impacts of energy costs on the competitiveness of local products and the preservation of jobs”, – reported in the Cabinet. Entrepreneurs asked the Prime Minister, “based on the world dynamics of prices for energy resources, in the framework of its membership in the Eurasian economic Union (EEU) to apply to the strategic partner of Armenia – Russia – with the request to reduce the tariff for imported gas and the pricing of natural gas for producers to implement in the national currency”, and not in dollars, as is done now. 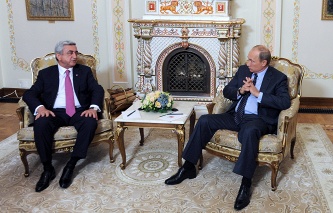 Russia reduced gas price for Armenia to $25 per cubic meter

The Prime Minister stressed that “progress in economic relations with the Russian Federation and other partners to a significant extent depends on energy prices, which do not restrict economic competitiveness”. He noted that “the Armenian authorities appealed to the Russian government on the issue of energy prices and, given the strategic nature of our partnership with the Russian Federation, we count on the positive decision”.

At the meeting with businessmen, the Prime Minister stated that it considers “invalid jobs”. In his words, “the government is ready with various tools to support manufacturers with the aim of preserving jobs and promoting enterprise development”.

Armenia receives Russian gas at preferential rates. According to last year’s intergovernmental Protocol between Russia and Armenia, from 1 January to 31 December 2015 the gas price for Armenia was set at $ 165 instead of $ 189 per 1 thousand cubic meters – the fare, which ran from December 2013. According to the Minister of energy and natural resources of the Republic of Yervand Zakharyan, a rate “contributed to the creation of favourable conditions for the development of economic ties and increasing business activity between the two countries”. The difference in fees went to cover the expenses of the gas company “Gazprom Armenia” CJSC – a subsidiary of Russia’s Gazprom, is associated with exchange rate fluctuations of the Armenian dram to the dollar at the end of 2014.

According to the energy Ministry, in 2014 Armenia had saved on customs duties for deliveries of Russian gas to $104 million (1.8 billion cubic meters) of oil – $48 million (222 million tons) diamonds – 2 million rubles.

The damage from the accession of Armenia to the EAEU would have amounted to approximately $ 1 billion, said the head of the Department of economic-mathematical methods at Armenian state economic University doctor of economic Sciences, Professor Ashot Tavadyan. “The most important position – gas prices and, first of all, it concerns Armenia and Belarus”, – said the scientist. According to him, the tariff for gas without 30% benefits, which Russia provides to Armenia, would inevitably impact on the economy of the Republic, which in this case would have lost about $ 150 million.