Key themes of the visit of the Tamim bin Hamad al Thani, is expected to become the energy and the situation in the middle East. Zaplanirovany meeting with President Vladimir Putin, Federation Council speaker Valentina Matviyenko and state Duma speaker Sergei Naryshkin. 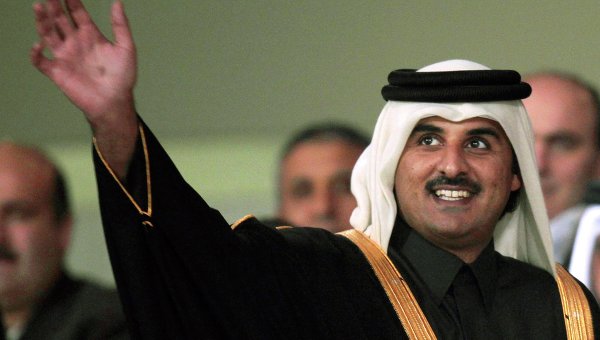 MOSCOW, 17 Jan –. The Emir of Qatar, Tamim bin Hamad al-Thani will arrive on Sunday in Moscow, where on Monday will meet with the Russian leadership.

It is expected that the key themes of the visit of the Qatari leader to Russia will be energy and the situation in the middle East. As reported in the Kremlin on the eve of the talks al-Thani with Russian President Vladimir Putin, “priority will be given to the complex build-up of Russian-Qatari cooperation in trade-economic, investment, energy and humanitarian spheres”.

The problem of understanding

Relations between Russia and Qatar can be described as difficult. Unpleasant incident, which cast a shadow over bilateral contacts, was the murder in February 2004 in Doha of a Chechen separatist leader Zelimkhan Yandarbiyev. On charges of organizing the crime Qatari authorities arrested and sentenced to life imprisonment two employees of the Russian Embassy, who were later extradited to Russia.

In 2011, there was a diplomatic scandal: the Qatari customs beat up the Ambassador of Russia in Doha, Vladimir Titorenko. As told then the diplomat, employees of the airport tried to enlighten pouches using the x-ray machine, although the employees of the Russian missions abroad was the resolution of the Ministry of foreign Affairs of Qatar to transport her without examination in accordance with the Vienna Convention. Nevertheless, representatives of security services of the airport, customs and police insisted, tried to take away mail, using brute physical force. The incident resulted in the head of the diplomatic mission and two accompanying staff members of the Embassy had suffered injury, the Ambassador had to undergo several operations due to a detached retina. The Russian foreign Ministry then called the incident a flagrant violation of universally recognized norms of international law and even went on a temporary downgrading diplomatic relations with Qatar.

Difficulty between Moscow and Doha in relation to the assessment of the situation in the middle East region. The Russian side is quite skeptical about the “Arab spring”. Moscow has repeatedly pointed out that these developments and became one of the reasons for the sharp rise of extremism, extremely Islamist movements in the region, chaos in Libya, the current crisis in Syria. Qatar, according to reports, together with Saudi Arabia has actively supported a series of regime change in several countries.

Advisor to the Director of the Russian Institute for strategic studies, Yelena Suponina, orientalist, noted that between Moscow and Doha “are still serious differences on the issue of Syria.” To overcome these differences, according to her, “it will be very difficult, however, without maintaining diplomatic contacts with this country a lot of progress on peace talks on Syria will not be achieved”.

“I am not very optimistic. It is unlikely that Qatar and Russia will soon be able to agree on the key issues of the Syrian settlement, especially on the political fate of President Bashar al-Assad. There is only one way – to bring these differences out of the brackets and develop those points of relations, which disagreements less,” said Suponina.

Among these areas of cooperation according to the expert, the economy. “Qatar has long promised to invest in various projects in Russia, including oil and gas. The case is hardly moving, but I would like to get. Need to coordinate efforts in the oil price and also on the various gas contracts. Here Qatar and Russia are competitors, but several years ago our countries have agreed at least once to coordinate the efforts in this direction”, — explained the orientalist.

Thus, despite the importance of the visit great results from it, according to Suponina, “expected”: Russia “its position on key issues, particularly regarding Syria will not change, but to maintain the contacts necessary”.