MOSCOW, January 17. In Moscow declare the Polish side the resolute protest in connection with the desecration of the Monument of gratitude to the red Army in Szczecin. 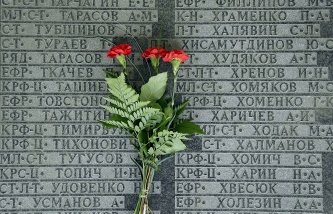 In Poland, a vandal smashed the headstones on the graves of Soviet soldiers and attacked a police

This was stated by the Russian foreign Ministry.
“In Poland committed another cynical act of vandalism of Soviet memorial.

In Szczecin unknown desecrated the Monument of gratitude to the red Army mounted on one of the Central squares, said in depodesta. – Characteristically, this is the second such incident in the city in recent months – in September 2015 were stolen star with five gravestones at the site of the municipal cemetery, where are buried more than three thousand Soviet soldiers”.

“The Polish side, not protecting the monuments connected with our history, demonstrated an indifference to international agreements, which it is a party, – noted in the Ministry. – In Warsaw violate the provisions of the basic relations between the two countries of the Treaty between the Russian Federation and the Republic of Poland on friendly neighbourly cooperation of 22 may 1992, in which the parties have given a clear commitment for the protection of monuments (there uses this term), which is the object of respect and remembrance for citizens of one of the parties”.

“The frequency with which the acts of vandalism, and their cynical nature, and that they occur with the connivance and even a direct instigation of the Polish authorities, gives grounds to say that we are dealing with a state policy based on historical revisionism. Claimed the Polish side strong protest”, – emphasized in the Russian foreign Ministry.

“We demand to find and punish the perpetrators, to restore the original appearance of the memorial, as well as take exhaustive measures to prevent similar incidents in the future”, – said the Russian foreign Ministry.

The DG called for an end to the “war of monuments”

The state Duma adopted in the end of December 2015, the Declaration on the inadmissibility of the desecration of the graves of Soviet soldiers in Poland and urged the Polish Sejm to put an end to the “war of monuments”. The draft document was introduced by the leaders of all parliamentary factions and lower house speaker Sergei Naryshkin.

MPs first expressed “deep indignation in connection with the desecration and destruction in the Republic of Poland of graves, tombstones, monuments, memorial structures commemorating the memory of Soviet soldiers who gave their lives for the country’s liberation from fascism”.