MOSCOW, January 18. State Duma speaker Sergei Naryshkin at the meeting of the Duma have informed that the Russian delegation will not attend January session of the parliamentary Assembly of the Council of Europe (PACE). This was reported to journalists by Deputy house speaker from the LDPR Igor Lebedev.

“Naryshkin said in January, definitely not going,” said Lebedev, answering the question of whether you discussed this topic on the Council of the Duma. 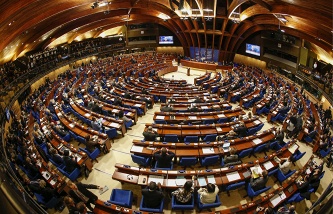 Slutsky: the delegation of the Russian Federation will miss the winter session of PACE

“At the present time at the head of the PACE Anne Brasseur sent a letter signed by the speakers of the chambers of the Russian Parliament that the powers of the Russian delegation for 2016 will be requested at a later date. January session we’ll miss,” he informed Slutsky.

On Saturday, a source familiar with the situation, reported that on 15 January under the rules of the Assembly had expired, when national delegations were supposed to submit a list of their compositions for the participation in the session of 2016. “The delegation of the Russian Federation such lists are not sent”, – said the Agency interlocutor.